One of my favorite portraits at The Butler Institute of American Art is the very lovely oil painting, Mrs. Knowles and Her Children, painted by the very talented John Singer Sargent in 1902. When I took my first grade classes to the Butler, this was the painting the children would gather around and just soak it in. Every child wanted to be one of those children in the painting, some for the life style, a few for the clothing and period,  some for the feeling of being pampered, but most for the genuine warmth emanating from this mother and her children.

Following is the reprint of Valerie Ann Leeds article on this famous Singer Sargent we believe was painted in London.


"Although John Singer Sargent exhibited great facility and accomplishment with all subjects he painted, his reputation was achieved by portraiture. A United States citizen by birth, he remained an expatriate with a peripatetic existence,
residing in Italy, France, and London. His style was formed by exposure to international influences, extensive travel, and study of the Old Masters, in particular the noted portrait painters Diego Velazquez and Frans Hals, combined with natural facility and astute visual perception. Cosmopolitan internationalism, blended with mastery in rendering the likenesses of late Victorian and Edwardian society, led to a flourishing career, and he was inundated with portrait commissions from both continents. Sargent's style, at once traditional and revolutionary, provided a stylistic bridge in portraiture between eighteenth- century British masters, such as Joshua Reynolds and Thomas Gainsborough, and
American portrait painting in the late nineteenth and early twentieth centuries.
The largest body of Sargent's portraits are composed in a recognizable format: a single figure seated, full-length, posed in the Grand Manner. However, he also painted group portraits that number among his most acclaimed compositions. Mrs. Knowles and Her Children is a leading example of these multi-figured compositions. Related family portraits featuring three sitters include The Misses Vickers (1884, Sheffield City Art Galleries, England); The Wyndham Sisters: Lady Elcho, Mrs. Adeane, and Mrs. Tennant (1899, The Metropolitan Museum of Art); The Acheson Sisters (1902, Devonshire Collection, Chatsworth, England); and The Younger Children of Asher Wertheimer (1902, The Tate Gallery). His reputation established, Sargent's output was at its height in the 1890s and early 1900s, during which time he produced some of his most notable, mature masterworks.
Despite its artful arrangement, the unstudied, unpremeditated quality of Mrs. Knowles and Her Children contributes to the particular success of the painting. It is not a stiff, ceremonial Grand Manner portrait, but instead shows a mother and her two sons in an informal family setting. Sargent captures the viewer's interest through acute attention to detail. The barefoot child's playful pose, his toy horse in the foreground, the rendering of the gray and white folds of the young woman's gown, delineating the varied textures and fabrics, and the mother's embracing gesture all contribute to the seemingly effortless realism of the scene.
The national notices of the Butler Institute's purchase of Mrs. Knowles and Her Children underscore the importance of the acquisition. The painting's entry into an American collection was heralded in an article favorably comparing it with one of Sargent's most celebrated works, The Wyndham Sisters, which had been purchased two years earlier by The Metropolitan Museum of Art. It stated that Mrs. Knowles and Her Children is "a work of great skill and arresting human appeal, it is reminiscent in its proportions, if not in its content, of the charming 'Wyndham Sisters,' also known as 'The Three Graces,' . . . Much spirit is shown in the artist's revelation of the character of the fascinating young matron, who is seated on a sofa with her two small sons reclining one on either side of her as she smilingly and spontaneously glances up from the picture book in her lap. The instantaneous quality of the portrait, too, adds greatly to its charm." Sargent uses a raised perspective in Mrs. Knowles and Her Children, an approach he favored for group compositions, also evident in The Wyndham Sisters andMrs. Carl Meyer and Her Children. However, the artist's compositional arrangements in other multiple portraits were not always met with such warm approval. Often criticized for the artificiality of settings and contrived poses, other groupings lack the immediacy, casual naturalism, and balanced composition of Mrs. Knowles and Her Children.The subject of the painting is Mrs. Arthur Knowles, formerly Mildred Clare Buchanan, third daughter of Captain James Buchanan of the 70th regiment. Mildred Buchanan married Arthur Lees Knowles of Alvaston Hall, Nantwich, Cheshire, who became High Sheriff of Lancashire in 1894. The two children are John Buchanan Knowles and Richard Arthur Lees Knowles, who were seven and five years old, respectively, at the time of the sitting. Mrs. Knowles and Her Children was undoubtedly painted in London, in Sargent's Tite Street studio, his preferred location. Props, such as the flowered fabric used as a backdrop and the canape on which the subjects are seated are common to other paintings of the period and also appear in photographs of Sargent's studio. The tedium of steady commissions resulted in Sargent's increasing reluctance to accept portrait assignments. "I have vowed a vow not to do any more portraits at all ... it is to me positive bliss to think I shall soon be a free man," Sargent wrote in 1907.  His declining interest can be traced to the early 1900s, though it was some years before he was able to act on his resolve to give up portrait painting.VALERIE ANN LEEDS"

This is from Wikipedia:

From Wikipedia, the free encyclopedia
John Singer Sargent (/ˈsɑrdʒənt/; January 12, 1856 – April 14, 1925) was an American artist, considered the "leading portrait painter of his generation" for his evocations of Edwardian era luxury.[1][2] During his career, he created roughly 900 oil paintings and more than 2,000 watercolors, as well as countless sketches and charcoal drawings. His oeuvre documents worldwide travel, from Venice to the Tyrol, Corfu, the Middle East, Montana, Maine, and Florida. 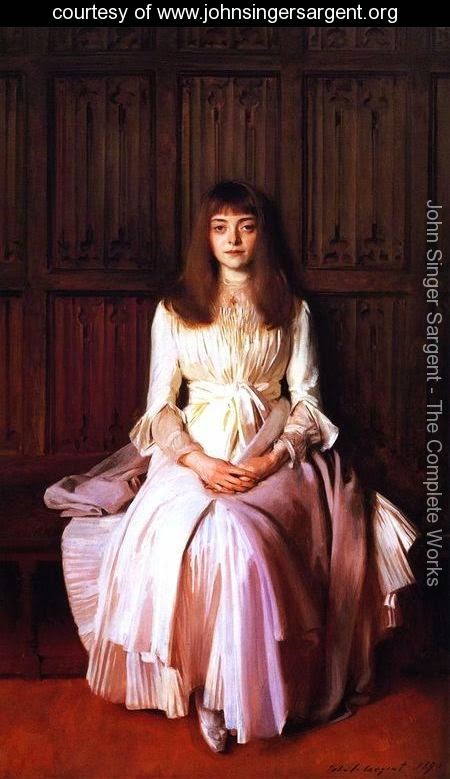 His parents were American, but he was trained in Paris prior to moving to London. Sargent enjoyed international acclaim as a portrait painter, although not without controversy and some critical reservation; an early submission to the Paris Salon, his "Portrait of Madame X", was intended to consolidate his position as a society painter, but it resulted in scandal instead. From the beginning his work was characterized by remarkable technical facility, particularly in his ability to draw with a brush, which in later years inspired admiration as well as criticism for a supposed superficiality. His commissioned works were consistent with the grand manner of portraiture, while his informal studies and landscape paintings displayed a familiarity with Impressionism. In later life Sargent expressed ambivalence about the restrictions of formal portrait work, and devoted much of his energy to muralpainting and working en plein air. He lived most of his life in Europe.
By Vision and Verse at Wednesday, May 21, 2014