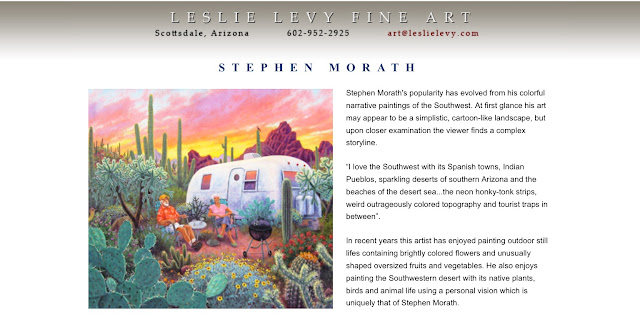 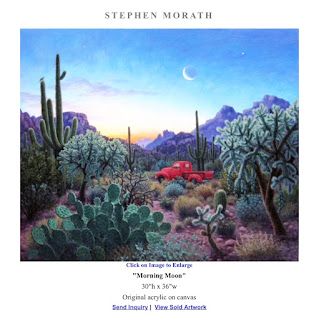 I had never heard of Stephen Morath before coming across his work online, but I was taken by his vivid use of color and his beautiful southwestern themes. Here is his biographical material in his own words: 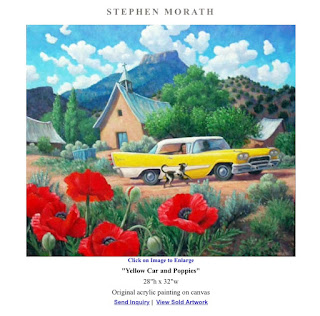 "For over thirty years I have painted scenes from all over the Southwest. My pictures rarely represent an actual place, but rather a place as I think it should be. They are often nostalgic, sometimes “cartoony”, sometimes quite naturalistic. Mainly I paint northern New Mexico and southern Arizona; but the extremes of my interest range from the frosty peaks of Colorado to the shores of the desert sea in Baja California, and all the wide open spaces in between. I am drawn not only to the beauties but also the oddities of the Southwest – the outrageous topography, the tourist traps, the honky-tonk strips, the old motel signs, the clash of cultures, the places where Indian America meets the science fiction of the ‘Fifties; as well as the pueblos, the sparkling deserts, the blue ranges, the birds in the morning…I prefer the rural countryside to the unpopulated wilderness, and rarely paint a landscape without some kind of human activity or artifact in it. Indeed, some of my paintings are crowded with non-landscape elements. Often, my paintings exhibit a touch of humor; others I paint to evoke cosmic feelings; still others are complex displays of fruit and vegetables. I like to paint figures, which so far have not featured prominently in my paintings; but I see my work moving in the direction of more figures and more realism. I am especially fond of small towns, back roads, and blue highways, where old trucks, lowriders, and airstream trailers can be found; and life goes on in a timeless way. 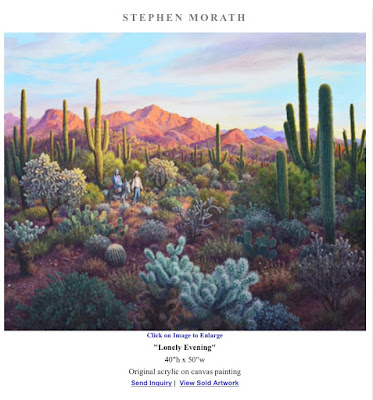 I am a third-generation native of Colorado, married, and the father of four. I studied and spent some time back East in my early days; otherwise, I have been a lifelong resident of Colorado, although a frequent visitor to, and lover of, New Mexico and Arizona. I and my wife, and formerly our now grown-up children, live in a ramshackle Victorian at the foot of Pikes Peak, surrounded by gardens and fruit trees. Besides painting, my main interests are high-country hiking, contra dancing, the performance of choral music, and trips to Europe and Mexico.
I paint almost exclusively in acrylics. Besides easel paintings, I have completed three public art projects in Denver, and in 2010 completed a great mural painting in a local church. My paintings have been featured on a number of products for many years including poster prints, greeting cards,  jigsaw puzzles, and tee shirts. 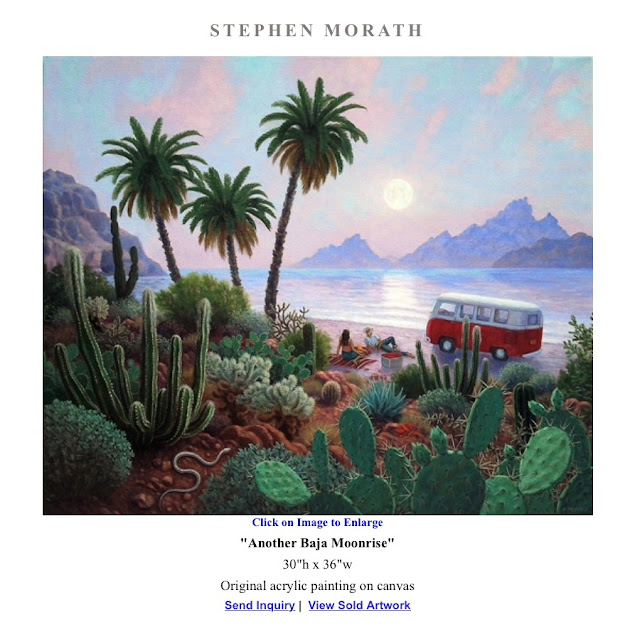 Exhibition history: I have exhibited paintings continuously in Scottsdale, Arizona since 1984.  During that time I have also shown at various galleries in Santa Fe, New Mexico and in Colorado; but Scottsdale has remained my major retail focus. The Colorado Springs Fine Art center owns one of my paintings.So does the Albuquerque Museum of Art." -Stephen Morath
By Carol Ann Kauffman's Vision and Verse at Tuesday, June 13, 2017