The Unforgettable Art of Zaya 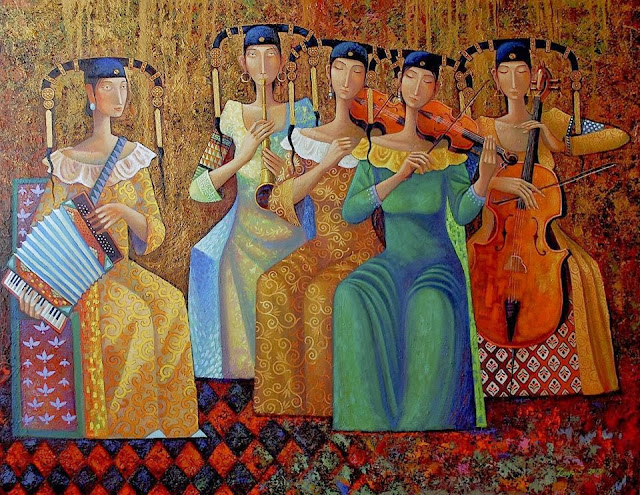 "Zayaaikhan Sambuu,  known as Zaya, was born in a small, isolated town in Grobi, southwestern Mongolia, in 1975.  During his teenage years the oppression and censorship of communism began to fade away, which enabled the re-emergence of forgotten Mongolian culture and heritage as well as the freedom of religion.  Growing nationalism and religious freedom allowed many people to practice Buddhism and as a skilled teenager Zaya was greatly encouraged by the elders to depict portraits of Buddhist Gods in order to recover their religious customs and values.  That had been forbidden by the communist regime for more than a decade.  For this reason, Zaya was first introduced to art through Buddhism.  Indeed, Buddhism had especially  influenced him and at the age of 15 he decided to become a monk. 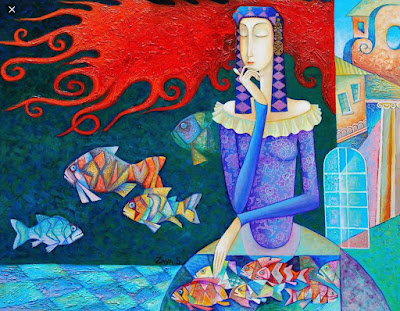 However, after studying Tibetan religious texts for two years, he realized that he had a greater  interest in art itself rather than religion.  In addition, the lifestyle of the monks and the strict rules of religion clashed with his artistic personality and creative mentality.  At the age of 17, Zaya  enrolled at the Soyol Fine Art College in Ulaanbaatar to study traditional Mongolian fine arts.  After finishing college, he continued to study at the Institute of Fine Art at the Mongolian University of Culture and Art, graduating in 2002.
Zaya combines Mongolian traditional painting with contemporary international (in particular Asian), influenced art.  His unique methods of using water colors, gouache, brush, and oil mixed media on canvas, allows him to illustrate the ancient culture and heritage of Mongolia and Central Asian nomadic people.  Although his works mainly consist of scenes from ancient daily life and the exotic portraiture of nature, he connects the spirit of nomadic Mongolian art with Tibetan and Japanese traditional art techniques.  By using different methods and studying various cultures, Zaya works to create his own genre, which enables him to suggest a world of antiquity within modern art.  His work, therefore, is neither  too conformist nor too modern, rather it is a bridge between traditional and contemporary art.  The simplicity of nomadic everyday life and its relationship to the natural wilderness is always the main subject matter of his works.  These themes are always depicted in his paintings with extraordinarily clear lines and textures, as well as visually strong, often warm yet slight dark, vibrant color.  His paintings contain female figures accompanied by wild beasts or animals like snow leopards, which symbolize the connection of beauty to nature.  His female characters appear to be very majestic and aristocratic and they often represent queens and princesses.  Their costumes and coiffured hair styles are carefully studied from the traditional fashions of Mongolian nomadic aristocracy.  His paintings are also inspired by the history of Mongolia and the Great Empire of Genghiis Khan.  The great legacy of his ancestors certainly influenced him personally thus, a number of his paintings are motivated and derived from the historical events. 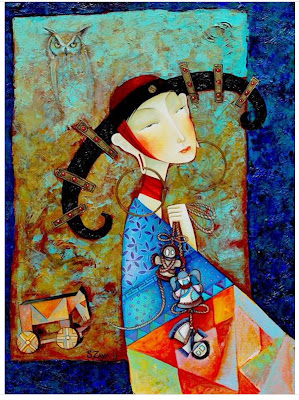 Horses are his specialty, the paintings such as 'The Reflection', demonstrates his talent at rendering horses with certain characteristics.  Their eyes are very lively and human like, hence, creating a poetic and emotional scene.  Zaya truly loves horses as every Mongolian does and he draws them with a great passion.  Indeed, horses have the greatest influence on Mongolian nomadic peoples' lives.  They have been one of the ultimate reasons for the success of Genghis Khan and other great conquerors' military victories.  it is certain that without horses, the lives of nomadic people would have been extremely difficult, especially their military success would have been impossible.  The ancient Chinese people recognized the nomadic peoples' advantage of horses in order to defend themselves against such and advantage, they built one of the greatest structures in the world, the Great Wall of China. 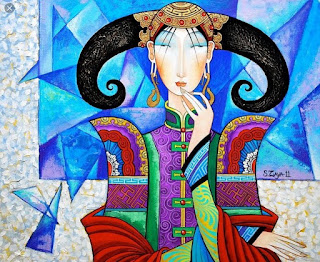 The nomadic lifestyle with its constant migration from land to land and never ending warfare, art in general, (especially the visual arts of nomadic people of Mongolia), have never been fully studied and are unknown to the rest of the world.  Nevertheless, the ancient nomadic Mongolian art is rich and full of mysteries like a rich land which has not been discovered yet.  Thus Zaya is working to introduce it to the rest of the world."