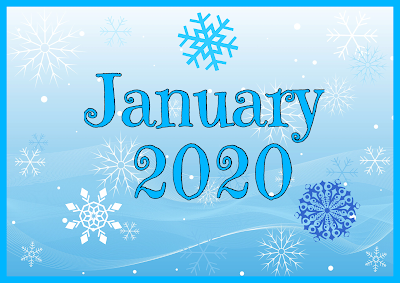 By Carol Ann Kauffman's Vision and Verse at Sunday, December 29, 2019 No comments: 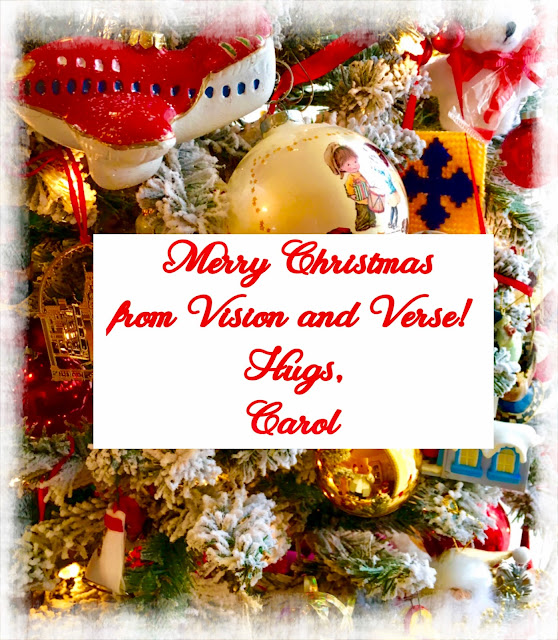 We at Vision and Verse wish you the happiest of holidays. We hope the love and peace you feel in your heart this  season lasts throughout the coming new year.

We hope you've found something here on Vision and Verse that sparked your imagination or kick-started your own creativity. Or maybe, you found a new artist or author to follow!

Vision and Verse will be taking a little break until the new year. We are revamping our look and reformatting our layout with a sidebar and all kinds of exciting stuff.


As one of our readers, you are valued as part of our little artsy-writer community. We appreciate your interest and taking the time to stop by and see what's happening here. See you in 2020! 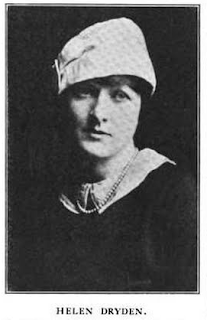 successful industrial designer in the 1920s and 1930s. She was reportedly described by the New York

Times as being the highest-paid woman artist in the United States, though she lived in comparative 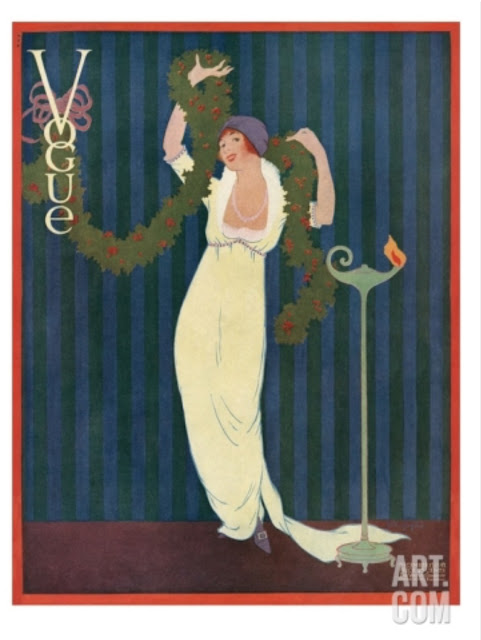 Dryden was born in Baltimore and moved to Philadelphia when she

was seven years old to attend Eden Hall. During her early childhood

and dresses to a newspaper for use in its fashion section. This in turn

led to a position as illustrator for Anne Rittenhouse's fashion articles 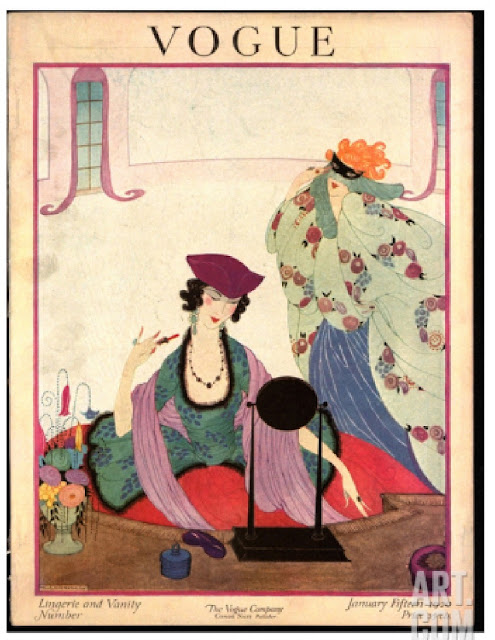 Dryden was largely self-trained, describing her works as

"a combination of things I like, in the way I want to do them."

Her artistic education consisted of four years of training in landscape

painting under Hugh Breckinridge and one summer school session at

the Pennsylvania Academy of Fine Arts. Deciding that she had no real

on fashion design and illustration. 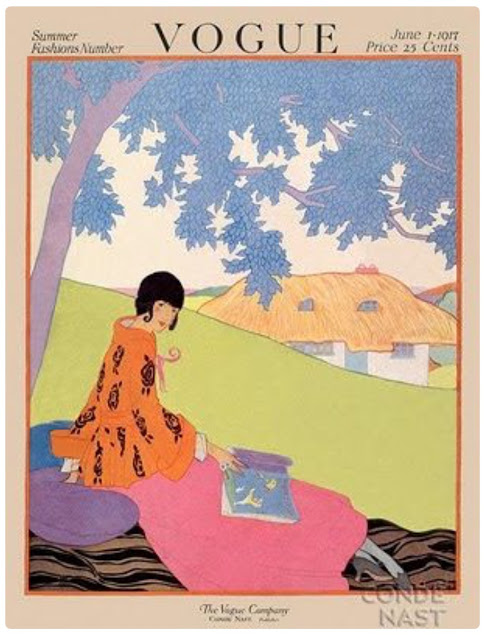 After moving to New York in 1909, Dryden spent a year trying to


interest fashion magazines in her drawings. None, however, showed


any interest in her work and many were harsh with criticism. Dryden


was particularly disappointed in her rejection by Vogue. 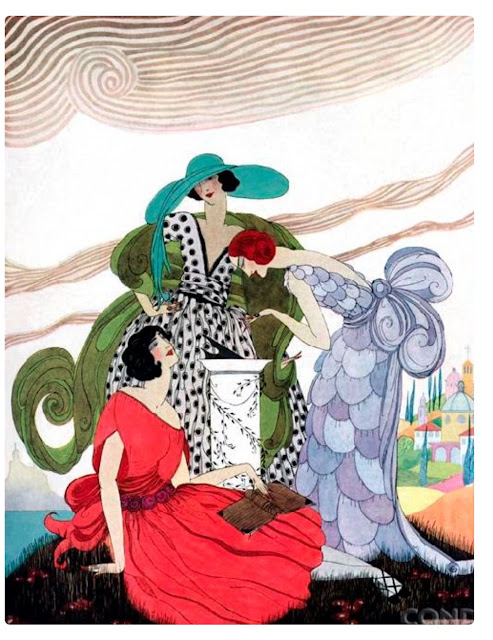 of Vogue and set out to make changes. Upon seeing Dryden's drawings,


they directed the fashion editor to contact her immediately. The result


during which she produced many fashion illustrations and magazine


covers. Her "essentially romantic style produced some of the most


imagined rather than realistic representations of dress."She also


illustrated other Condé Nast titles, including Vanity Fair and House 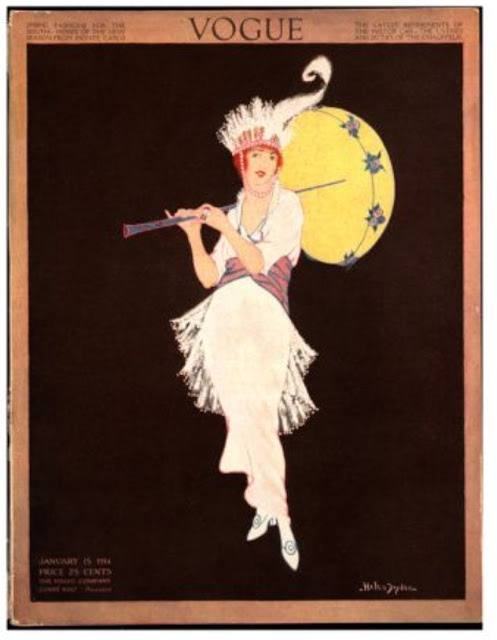 In addition to her prolific career as an illustrator, in 1914 Dryden

launched a successful career as a costume designer. She designed the

Step, followed by designs for several other stage plays including

Clair de Lune, the fanciful drama based loosely on a Victor Hugo

romance. Although the play starred Lionel and Ethel Barrymore,

for the play's success. 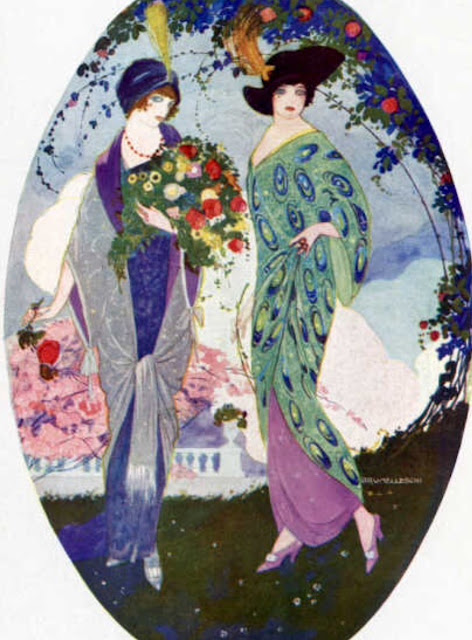 to industrial design, producing a number of designs for tableware,

lamps, and other housewares, for the Revere Corporation.[5] She

crash of 1929, at which point she was replaced by George W.

Walker.[6] It seems Dryden never fully recovered from this blow.

According to Christopher Gray, "The 1925 census recorded her 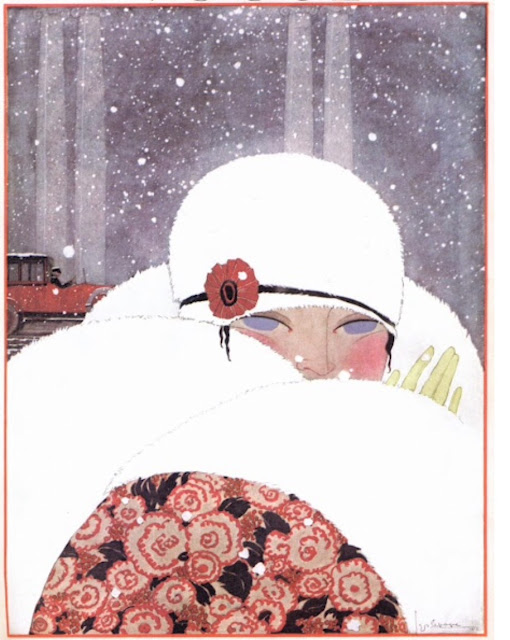 Dryden worked for Studebaker from 1934 to 1937, reportedly earning

$100,000 per year. Automotive designer Raymond Loewy contracted with her to help him design

Studebaker interiors. Her work on the interior of the 1936 Studebaker Dictator and President that

The advertisements by the automaker proclaimed, "It's styled by Helen Dryden."

Dryden designed the Studebaker President throughout,and the press marveled that a woman had attained

this eminence in mechanical engineering. She was considered "one of the top industrial designers and

one of the few women in the automotive field." Dryden worked with Loewy through 1940.

By 1956 Dryden was again living in a $10-a-week hotel room paid for by the city's Welfare Department.

At the time, she referred nostalgically to "her '$200-a-month' 10th Street apartment".


Encore presentation
I claim nothing here as my own.
All in formation and images are from Wikipedia.
By Carol Ann Kauffman's Vision and Verse at Tuesday, December 24, 2019 No comments: 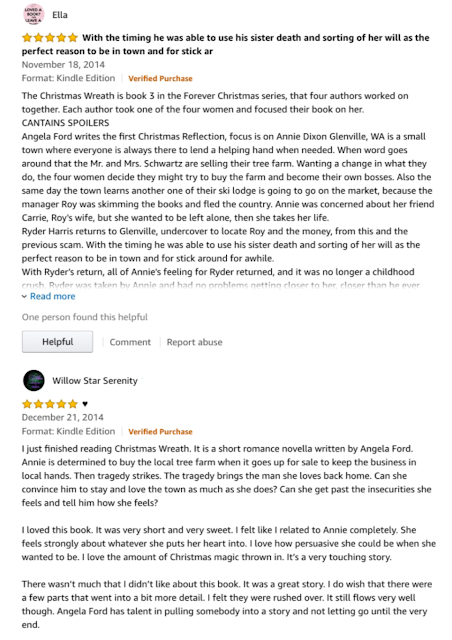 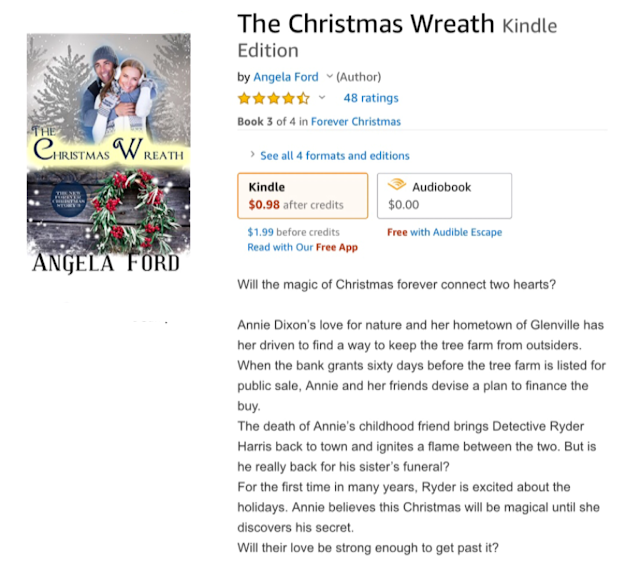 By Carol Ann Kauffman's Vision and Verse at Monday, December 23, 2019 No comments: 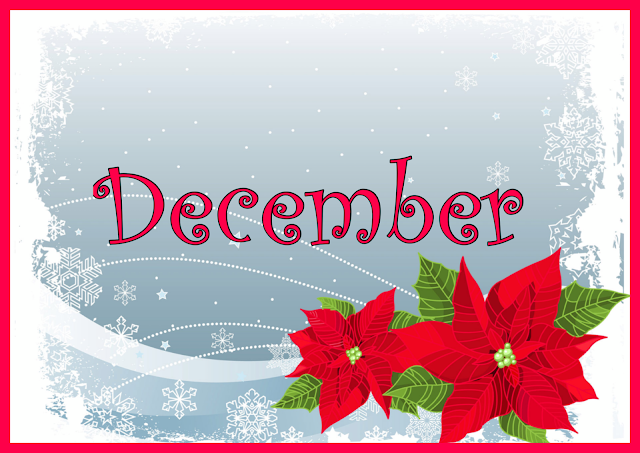 Vision and Verse will be taking a little break.
We’ll be back as soon as possible,
better than ever! We are revamping our
look and reformatting the layout with
a sidebar and links to my books
and all kinds of
exciting stuff!
❤️
See you in 2020!

By Carol Ann Kauffman's Vision and Verse at Sunday, December 22, 2019 No comments: 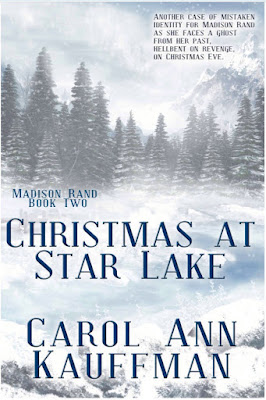 Madison Rand runs Rand Solutions, an unusual and very helpful agency in the beautiful town of Silver Maple, New York. The police inform her that her highly qualified, specialized employees are targeted by a professional killer and being picked off, one by one. To save their lives, she closes down her business, sends them all away, and retreats to a friend’s cabin at Star Lake to figure out who is after them and why.

Danger follows her to the cabin in the woods at Star Lake, where an old ghost from her past reappears on Christmas Eve, hellbent on revenge, and the madman tracks her through the underground caves at the lake.
Shots are fired. A body drops to the ground. Is it Kyle Miller, the love of her life, who followed her to the cabin to propose on Christmas Eve?

The air is thick with treachery and deceit. The body count is rising and old friendships are put to the test. But Madison Rand believes in miracles, especially at Christmas time.

*A cute note*
Christmas at Star Lake is the second Madison Rand Christmas Mystery. The third and final book in the series is due out in late 2020. My publisher requested "no dead bodies in this book".

By Carol Ann Kauffman's Vision and Verse at Friday, December 20, 2019 No comments: 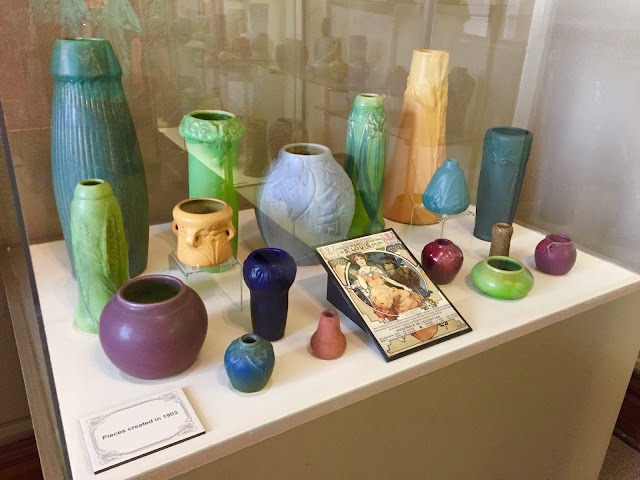 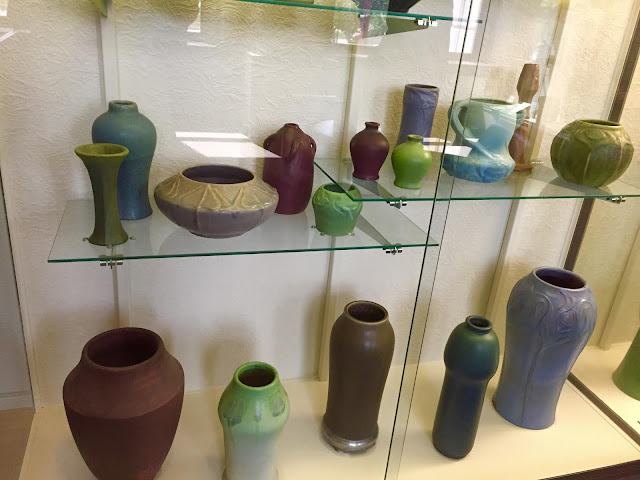 Artus Van Briggle was a potter who in his early years experimented with the various
types of clay from the Colorado region. He combined the  most important features of
the clay he liked best from the Georgia and Tennessee areas to create his own very
special mix. 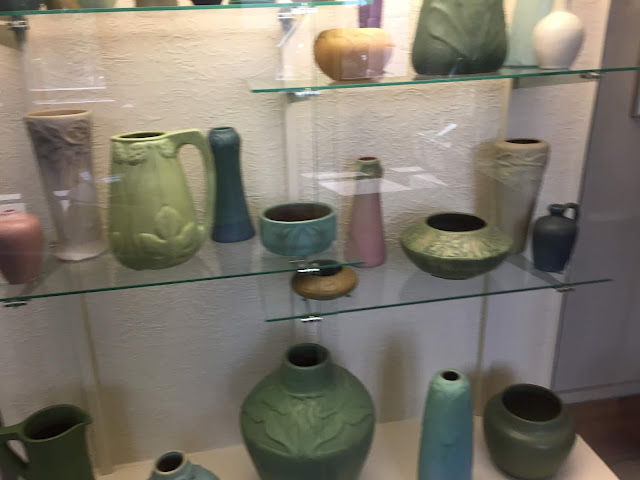 Next Artus made a plaster mold from the original clay piece. Then a liquid clay
mixture was poured into the mold and left to hardened. 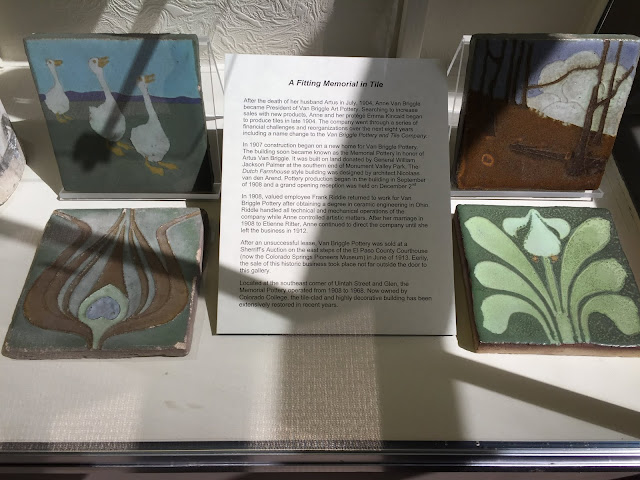 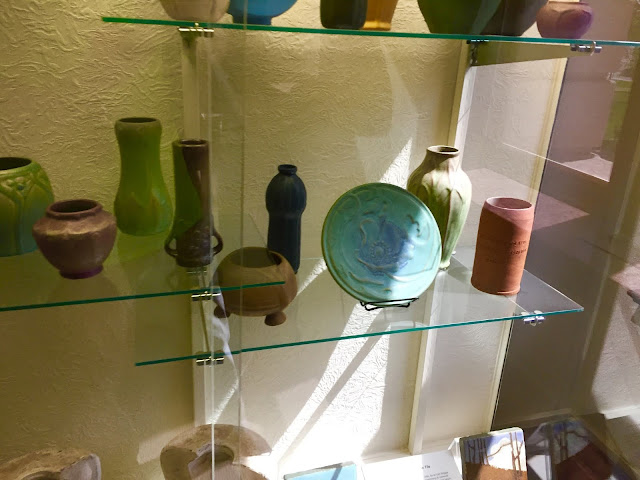 The next step was to very carefully remove the now hardened clay piece, removing
the seam lines and retouching the design. The clay piece was then ready to be fired
in the kiln.

The Colorado Springs Pioneer Museum is free and open to the public. It is a
gorgeous building with beautifully restored rooms. The courtroom is exceptionally
well done. The Briggle Pottery Museum is just one of the many wonderful exhibits
in museum. If you are in the area, please stop in for a delightful afternoon. of tracing
the history this part of our wonderful country.
By Carol Ann Kauffman's Vision and Verse at Thursday, December 19, 2019 No comments: 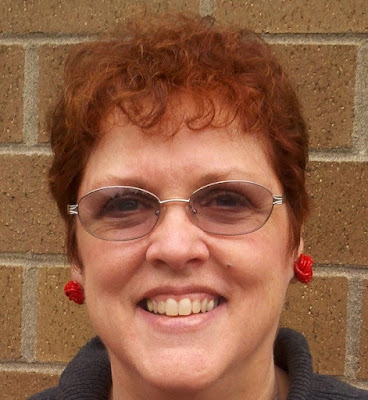 Good morning, Theresa! Welcome to Vision and Verse, the site for art and authors. Can you tell us a little about what you've written?
I have been published since 2013 and have 25 books in print in four genre, fantasy, scifi, paranormal/romance, and memoir.

What is your favorite genre to write?
So far, I haven’t met a genre I didn’t like. 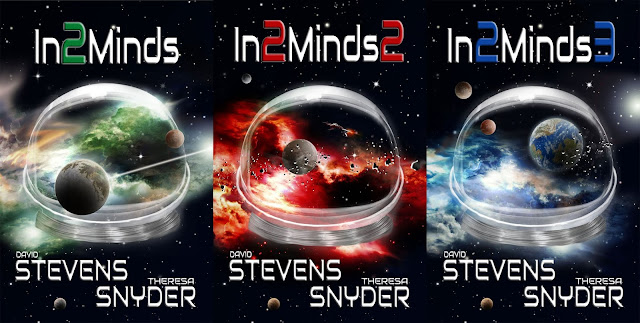 Favorite food.
Chocolate and it’s good my dragon muse, Farloft, loves it too, because he keeps a hoard for us. 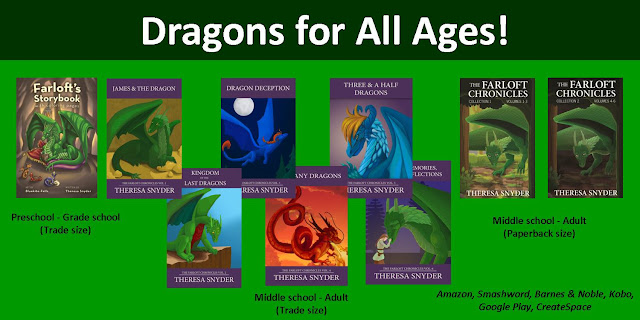 Wine or beer?
Neither. I am a hard liquor drinker if I drink. Usually liquors.

Where would you like to visit?
Austria is my next dream vacation, but I love to travel, and any destination is good.

Favorite musical artist.
A love a variety of artists. I would have a difficult time picking just one. 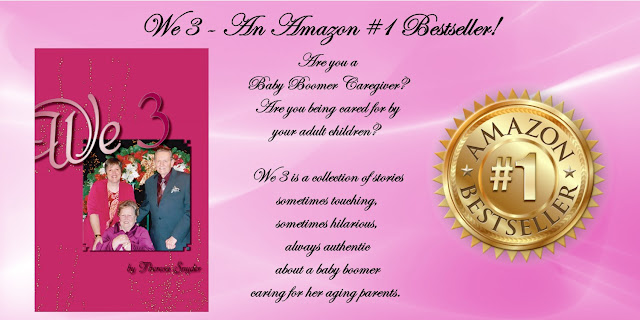 Do you listen to music when you write?
Always 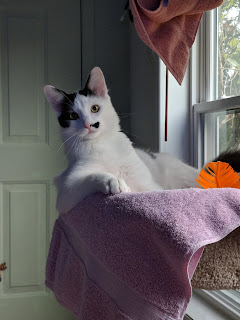 Usually piano, cello or classical music. Something I can’t hum to or sing too. I find that distracting.

What makes you laugh?
My cat, Watson is quite a character and makes me laugh daily with is antics.

Since this is an art AND author blog, I am obliged to ask: Favorite work of art or sculpture.
Another one I would have a hard time answering. I do like art and sculptures that represent real people or objects.

How old were you when you started writing?
I have been writing since I was in grade school. My mother gave me a journal to put down my thoughts. I have journaled every day since then. I wrote my first book in middle school.

Do you plan out your book with outlines and notecards? Or just write? I just write. I have usually thought it out thoroughly before hand. 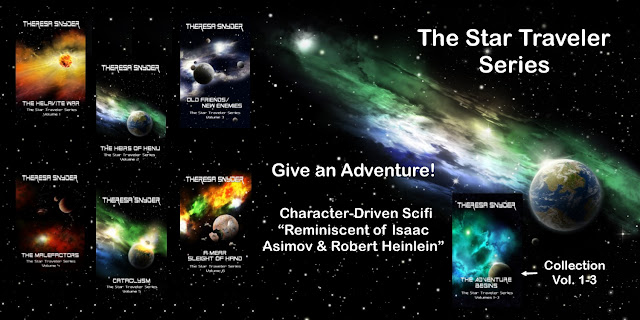 Describe your perfect evening.
A nice meal with friends and a good long conversation over tea and dessert.

Where do you get your inspiration?
My inspiration comes from everywhere, past experiences, people I knew or know, news articles I read on current events, and discussions with friends.

What do you do when you get a writer's block?
I usually take a nap or go to bed for the night. Sleeping on a problem creates a solution for me.

Who is your favorite author?
You ask difficult questions. I might be able to tell you one for each genre, but not just one. I love Beryl Markham, James Herriot, Asimov, Heinlein, Bradbury, Anne Mccaffrey, L. Ron Hubbard, and Margery Williams to name a few. 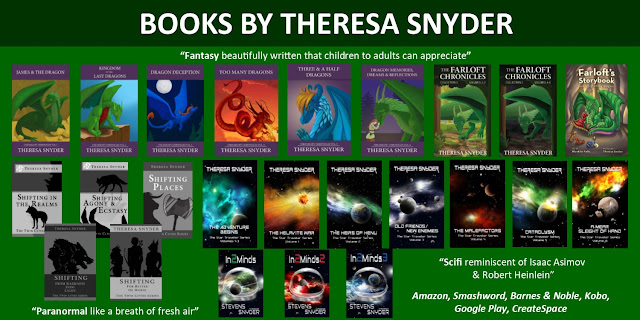 Best book you ever read.
I really loved the pose of “West with the Night”.

Last book you read.
I am currently reading several. I edit books for other authors so I can’t really say what it is I am reading currently, but it is a winner.

Oh, that is good to know that you edit. Note to self. What would you do for a living if you weren’t a writer?
I am doing it. I love to edit and help other authors polish their work and make them shine.

Who is the one person who has influenced your personal life the most and why?
My parents formed me both morally, intellectually and spiritually. 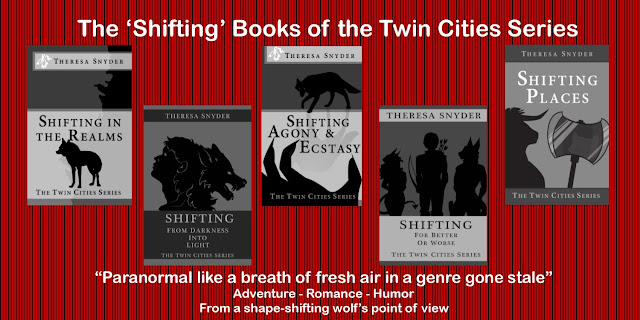 If you could sit down and have a conversation with ONE person, living or dead, real or fictional, who would it be and why?
I would like to sit down with my grandparents. I never got to meet my dad’s parents, they died when he was very young. My mother’s parents both died when I was a child. I have heard so may stories about them all. I would love to meet them.

What advice would you give someone who aspired to be a writer? Have faith in yourself. Write the best you can. Turn out the cleanest product you are able to the public.