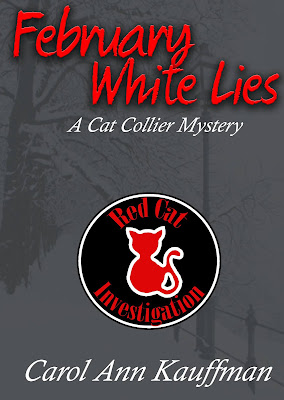 Join Cat Collier from January Black Ice as she starts her own detective agency, Red Cat Investigations, inside the gorgeous old Palazzo Castellano Hotel and solves her first real paid case, the case of Shotzie, the missing French poodle. Just when she feels she is destined to find lost pets and missing luggage for the rest of her life in her beautiful new office, complete with business cards, magazines in the waiting room, and her Red Cat logo painted on the frosted glass door, a lovely, mysterious woman named Ms. White hires her to find out who is stalking her. A dead rat on her car. Being run off the road. A car bombing. Someone wants her frightened or maybe…dead.
The trail of graft and corruption leads Cat into danger as she hides the mystery woman with the old, reclusive lawyer Detrick Bittmor for safe keeping.
Cat’s relationship with the handsome Erick “Carter” Larsen is put in jeopardy when she teams up with Officer Kiernan Scott from the Heaton Valley Police Department to unravel the mystery in February White Lies.

“The roads are horrendous! It’s freezing out there. I don’t think you should go. His flight arrives in the middle of the night. He told you not to go get him. It’s extremely dangerous and inconvenient. He’ll find a way home,” my mother snipped.
“I’m sure he could find a way home, but I want to go get him. I’ve missed him.” I spoke calmly but glared at the phone, wondering if my mother called me just to make me crazy.
“That’s not a smart decision,” she said. I could hear her wrinkling up her nose.
“Well, I’m going anyway, Mother.”
“If you’re not concerned with your own safety, then what about all the poor, hapless people who happen to be on the road at the same time as the daredevil Cat Collier?”
“I’ll steer clear of all other vehicles. Don’t worry about me, or any unfortunate soul on the highway with me. We’ll all be fine.  I’ll talk to you tomorrow. Good night, Mom.”
“Good night, wild child. Be careful.”
After the conversation with my mother, I needed aspirin and a nap before heading to the airport to pick up my boyfriend because alcohol, my first choice, would have seriously impaired my driving ability.
Hours later, I pulled out of the parking lot of my apartment building, refreshed, excited, and in happy anticipation as I slowly crawled through the icy, snow-covered, country roads to the Youngstown-Warren Regional Airport.

“Flight 211 from New York has landed. Passengers will be arriving at Gate Three,” the United Airlines flight representative announced. I scrambled to the gate and waited as the weary, red-eye travelers quietly trickled passed me from the gate. The sleep-deprived commuters shuffled to baggage pick-up in a zombie-like state.
But my eyes were glued on the doorway. Finally, I saw his gorgeous head of dark, wavy hair towering above the others.
Now, you need to know something about me. I never get the handsome guy. I’m never even in the running. I’m short, more round than the publicly sought after elongated image of beauty, and I have this wild mop of uncontrollable red curly hair. I have freckles. I’m stubborn. I have an odd sense of humor. I don’t like to be told what to do.
My mother says I lack social refinement. I don’t care. She also says I have bad taste in men and has never liked one of my boyfriends…until Carter, that is. Why this sweet, kind, smart, handsome creature left his underwear model girlfriend for me, I don’t know. But I’m deliriously happy.
“Carter!” I shouted and waved. I startled some of the near-by sleepwalkers. “Sorry,” I whispered.
He searched the waiting crowd, broke into a giant grin when he spotted me, and rushed towards me as fast as he could without knocking over the stragglers.
“You’re here!” he picked me up, hugged me, and kissed me. “I told you that you didn’t need to come and get me. I would’ve rented a car. It’s the middle of the night. And it’s freezing.” His smile lit up the airport terminal. His hug was warm and strong. Everyone else was dragging, but the tall, dark, and handsome Erick Carter Larsen was full of energy. “Thank you for coming, sweetie.”
“Oh, my pleasure,” I said. I saw he had his carry-on bag. “Do we need to go to baggage pick-up?”
“No, I had the rest of my stuff shipped. It’ll all be here Wednesday.”
“Then let’s go home,” I said. I reached for his hand.
“Home. Sounds wonderful,” he said, clasping my hand as we walked out the door.
We slipped and slid our way to my old, red Chevy Cruze, clutching onto each other for support.
“Oh, safe!” he said as he closed the car door. “The sidewalks and parking lot are treacherous. Have these people never heard of rock salt?”
“It’s too cold for rock salt to work right now and… we’re not safe yet. The roads are slick. Luckily, everybody else is home asleep, so we’ll have the road back to Heaton Valley all to ourselves. Buckle up, honey, and hold on tight.”
I pulled out of the parking lot and slid sideways, just missing the unmanned ticket booth.
Carter shrieked and covered his face while I howled with laughter. I’m used to driving in this kind of weather.
“You almost took out that ticket booth,” he panted.
“The operative word being ‘almost.’ Quit fussing,” I laughed. “I had a good four-inch clearance.”
Carter groaned. “I think there are more dents on your car since I left you last week.”
“No. Some cowardly paint may have run off in fear, but no new dents.”
Carter raised an eyebrow at me.
“Excuse me, Mr. Larsen, would you prefer to drive?”
“No, absolutely not, Miss Collier. You’re doing a great job. Fantastic. No complaints.” He searched the floor and in the back seat.
“What are you looking for?”
“Helmet. Mouth guard. Knee pads. Shin guards. Rosary beads to wear around my neck. Holy water. Race car shoulder harness. Tibetan prayer shawl.”
“Rough flight, honey?” I laughed.


“Not until now,” he teased with a wink and a smile.