SON OF DRAGONS by Andrea Cooper

Book Description:
In a time of false peace, the dead rise as soldiers for the Warloc’s scheme. For thousands of years he has stood ready for the final battle. Though the witch and her cursed Elvin have destroyed his physical body, now with his protégé, he has honed a new way to wage war.
Shunned by her own people and weary-hearted from centuries of lost loves, Elvin warrior Mirhana scours the land to silence the undead. Her heart has turned as cold as the sword she wields, until a prince seeks her aid.
Never has Prince Landon met a woman like Mirhana. Both beautiful and deadly, she haunts his dreams. The battle at hand becomes more enchanting than fighting to remain true to his unseen betrothed.
When a traitor emerges, new alliances are tested and the only remaining hope is to follow the prophecy and find the ... Son of Dragons.

“Don’t move or you’ll draw their attention,” a female voice like music to his ears whispered. With a movement like lightning, she scooped up the knife, and then sent it sailing into one of the Spider Kings.
The blow knocked the King’s crown lopsided. The cat sprang for another spider, and ripped the beast apart. Landon rose. When he looked back to thank her, the words stuck in his throat.
Green eyes chipped from emeralds stared up at him. The same eyes he saw last night. Her hair blacker than the night was braided, but wisps had worked free around her face. Even her skin glowed with the moonlight as if she bottled its light inside her.
“Watch out!” She rolled to the side as a spiked mace smashed into the ground where she had just been.
Landon moved into the shadows, away from her reluctantly. It was as though a seraph of his imagination had sprung to life. Then the Spider Kings shouted, but they merged with images of the boar-faced creatures. This was some type of sorcery. He dashed to his sword and kicked aside one of the yellowed creatures that squatted in his way.
As he stood, his blade sliced through the boar’s face. The creature kept moving. He would not hide away, but fight until either these creatures were dead or he was.
“Aim for the neck first,” the woman shouted to him.
His sword thumped as he hit the creature’s shoulder. With a spin, he brought the blade up and the head rolled across the ground.
“He’s got a knack for fighting,” another woman said. She was dressed in blue and her silver blades flew through the air.
In the distance, a horn sounded. “Quickly! They call for others.” The blue woman danced aside as one of the creatures snatched at her leg. “Melwyn.” His emerald-eyed seraph sent an arrow into one of the creatures scrambling down the hill. “Carry him to safety where the others wait.” 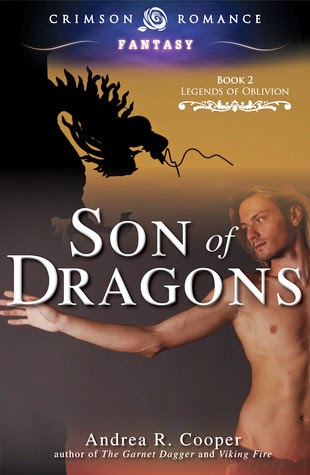 About the Author:
Andrea R. Cooper writes fantasy, paranormal and historical romance. Her favorite childhood memories revolved around creating vibrant characters for her friends, and then acting out their adventures. Inside her fantasy worlds of darkened forests, dragon-filled glades, and iced islands, nothing was banned. From the ethereal
Elvin to the most maligned Vampires, all were welcome in her fictional realities, a stark contrast to her home, where the magical and mythical was forbidden.
Divorced and disillusioned of love and believing all the love songs and books exaggerated, she put aside her creativity for life. Many years past before characters, from the familiar to the freshly conceived, came to her again, but this time teasing at a new passion, the written word.
Gradually, her real life hero brought love and magic back into existence. During the time when her characters were getting reacquainted, the love of her life was showing her that true love never gives up and rekindles no matter how many times others attempt to extinguish it. Today, she is happily married with three children.
Andrea believes in the power of change and delighting in each moment. But most fervently, she believes in the magic of love and imagination again.

Official Website: http://www.andrearcooper.com/
By Vision and Verse at Friday, June 27, 2014