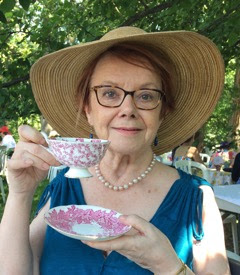 Good morning, Margaret and welcome to Vision and Verse, the place for Art and Authors. What have you written?
Gazillions of words of newspaper copy, both sides of the Atlantic, a couple of short stories, an animation script, and my debut novel, A Jacketing Concern, released in September.

What is your favorite genre to write?
Historical fiction/mystery

Tea or coffee?
I’m British born so naturally it’s tea. No surprise there.

Pizza or ice cream?
Not big things in my diet, although I do eat them. I think ice cream has a slight edge over pizza.

Wine or beer?
I’m the black sheep of my family: I don’t drink. I like an occasional shandy (lemonade and beer mix) on a hot day. 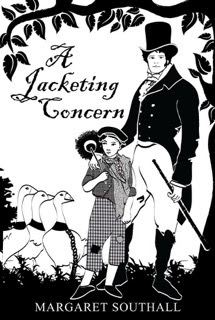 I love to travel. Have done lots of it and want to do more. Australia, China and Africa are top of my list at the moment.

Do you listen to music when you write?
Not often.

When you do, what?
New Age orchestral.

What makes you laugh?
Wit. Plays on words.

This is an Art AND Author blog, so I am obliged to ask, what is your favorite work of art or sculpture?
I’ve been fortunate to see many fine works in Europe and North America. But one statue that really has remained with me since I first saw it six years ago is a statue in Wolverhampton Museum (UK). It’s a factory worker on his way to work. To me it just exudes the independent spirit and industriousness of the Black Country (Midlands), where I was born, and its people.

How old were you when you started writing?
I was around ten or 11years old. I wrote a story for the annual that the final class at my elementary school, wrote, illustrated and bound.  I don’t remember what the story was about.  I also wrote a play about Robin Hood on a pad of cheap writing paper.  Unfortunately, the pad ran out of paper before I could finish the play.  Prior to creation of this juvenilia, I made up stories to tell my sister before we went to sleep. 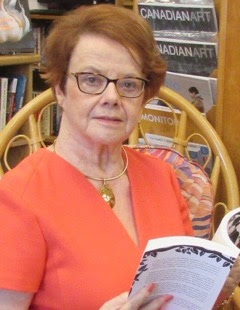 Do you plan out your book with outlines and notecards? Or just write?
For A Jacketing Concern, I did both, but mostly the latter. I thought about it and planned a lot of it in my head as I stared into space looking at nothing in particular.  I roughed out written bios of main characters, also did some “clustering” on paper of ideas about a central aspect for the plot, or of a character.

Describe your perfect evening.
Curl up with a book in a comfortable armchair, with a cup of tea.

Where do you get your inspiration?
How do I answer that?

I ask the questions here, kiddo!
I read a great deal, am sensitive to people, atmosphere and surroundings. The results seem be taken in by me, and, as
the components of a kaleidoscope get shaken to form new patterns, something like that seem to happen in my mind and subconscious.  Then of course, I am always asking myself “What if?” a question that soon gets the ideas coming.
What do you do when you get a writer's block?
That only happens if I start comparing myself to other authors. I find the best thing is to just take a rest, and not try so hard. 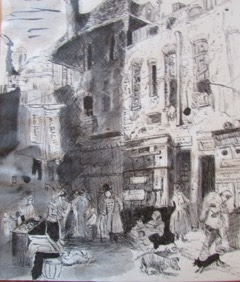 Who is your favorite author?
I have several, but Jane Austen leads the pack.

Best book you ever read.
The Far Pavilions. I didn’t want the story to end.

Last book you read.
Just finished The News from Waterloo: the race to tell Britain of Wellington’s Victory. I read it as part of my research for another book and found it fascinating.

What would you do for a living if you weren’t a writer?
I’d be either and actor or an artist. I do paint and I have done some amateur acting.

Who is the one person who has influenced your personal life the most and why?
A very close friend of mine, who is the type of friend to have when you really need one.

If you could sit down and have a conversation with ONE person, living or dead, real or fictional, who would it be and why?
Being allowed only one, makes it very difficult for me to answer; however, Captain James Cook leads the pack. I envy him his travels: he went where no Europeans had been before. I’d want to know first hand about the fascinating places, peoples, flora and fauna he saw on his travels.

What advice would you give someone who aspired to be a writer?  There are two things I’ve found helpful: Read, read, read; you’ll take in by osmosis so much about story, characterization and plotting without even realizing it.
My other advice is a saying on a bookmark I found when I felt like quitting: “Rest if you must, but don’t quit.” I took that advice.


By Carol Ann Kauffman's Vision and Verse at Wednesday, February 14, 2018