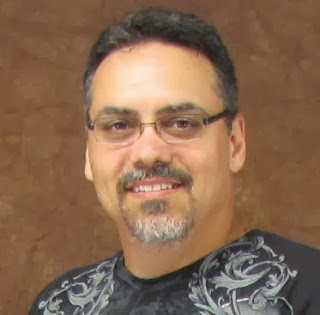 Good morning, Nat.  Welcome to Vision and Verse, the Place for Art and Authors.  What have you written?
I’ve written a yet unpublished fantasy, titled “Necromancer Awakening”. I’m currently writing several synopses for it and will begin querying agents and publishers in January of 2014.

What is your favorite genre to write?
Fantasy is my primary genre, though I’d feel comfortable in any type of speculative fiction. I find the power of speculative fiction lies in its ability to let the writer point a finger at certain elements in society without the reader necessarily realizing it.

Favorite food.
I grew up in a large Italian family, so pretty much anything Italian.

Tea or coffee?
One cup of coffee every morning. No more than that, though. I do drink tea when I’m not feeling well, however.

Pizza or ice cream?
Pizza. It’s all about the carbs for me!

Where would you like to visit?
One city I’d love to see is Moscow. I’ve always been fascinated by it. That’s probably because I grew up during the height of the Cold War.

Favorite musical artist.  Do you listen to music when you write?  What?
This is a tough one, because I love all music. However, if I had to pick one band/artist, I would choose Genesis. Their lead singer was Phil Collins, and he would be my second choice. Their music is unlike most rock bands (they are technically “progressive rock”) in that it is carefully orchestrated. It’s as close to classical music as rock can get, in my opinion.

I don’t listen to music as I type, because I’ve found it disturbs my focus. I do, however, listen to music when I’m imagining scenes (in the planning phase) and trying to get a feel for the overall emotion.

What I listen to depends on which emotion I’m trying to channel. I’ve found that Heavy Metal allows me to channel anger, and it helps me envision fight scenes very well. Progressive Rock is a cornucopia of emotion, so it’s a great all-purpose music for me while planning.

What makes you laugh?
You can never go wrong with a good pun! Oh, and my beagle. He tells great jokes.

How old were you when you started writing?
The first story I wrote was in high school, and it was an absolutely horrible bank heist story. I was fifteen years old at the time. It was “edgy” because it had cuss words in it. That was almost thirty years ago.

Where do you get your inspiration?
Inspiration is an interesting thing. It’s rare that I have some epiphany in which the universe plants a story in my lap. What I’ve found is that I usually have seemingly unrelated threads of thought going on for years at a time. Then, something happens and they all converge. That’s how “Necromancer Awakening” happened, and it’s how some other untitled projects I’m working on happened as well.

What do you do when you get a writer's block?
Writer’s block is usually a symptom of spending too much time with a particular project, for me. It happens to me every six months or so, then I step away for a couple weeks. When I come back, I’m fresh and ready to go for another six months.

Sometimes it’s less drastic than that, however. Sometimes you get stuck on a specific scene or situation. When this happens to me, I fall back on the “try/fail” cycle and create more trouble for my characters. If I’ve done my job of making my characters living, breathing people, then they’ll always react.

Who is your favorite author?
If I was pressed to choose only one, I would choose Raymond E. Feist. He was responsible for turning me into a reader when I was 12 years old, and he’s a large part of why I’m a writer as an adult. I’ve been fortunate enough to forge an electronic friendship with him over the last 20 years, and he never hesitates to answer my questions.

Best book you ever read.
The last one.

Ok, I feel like that was punting (though there’s some truth to it). Some will laugh, but I’d have to place Harry Potter and the Sorcerer’s Stone toward the top of the list. It was pure story on every page.

Who is the one person who has influenced your personal life the most and why?
When I was growing up, my best friend’s father, Bruce, became my martial arts instructor (Tang Soo Do). More than that, he became a second father to me. When I was going through the worst time of my life as a teenager, pulling away from the world as a result of a horrible car accident that I caused, he wouldn’t give up. He pulled me out of the shell I was crawling into and helped me step back out into the world.

If you could sit down and have a conversation with ONE person, living or dead, real or fictional, who would it be and why?
As strange as this sounds, I would love to have a bona fide conversation with one of my main characters, Mujahid Mukhtaar, an amazingly powerful necromancer…and all-around good guy. He’d be a good friend to have.

What advice would you give someone who aspired to be a writer?
Writing is a craft. Like any craft under the sun, you can practice it, and you can get better at it. When you first start down the road, your writing is going to be horrible. Don’t let this discourage you! We were all there, right where you are, writing crappy prose and worse stories! But what separates a successful writer from an unsuccessful writer is the successful writer never quit. And while I’m on the subject of success, you need to define success for yourself. Never let another person define it for you.

Do you have any links for us?
Here are my social media links:


Pinterest: http://www.pinterest.com/NatRussoAuthor/
By Vision and Verse at Friday, January 03, 2014