ENCORE: I Love the Art of Beryl Cook 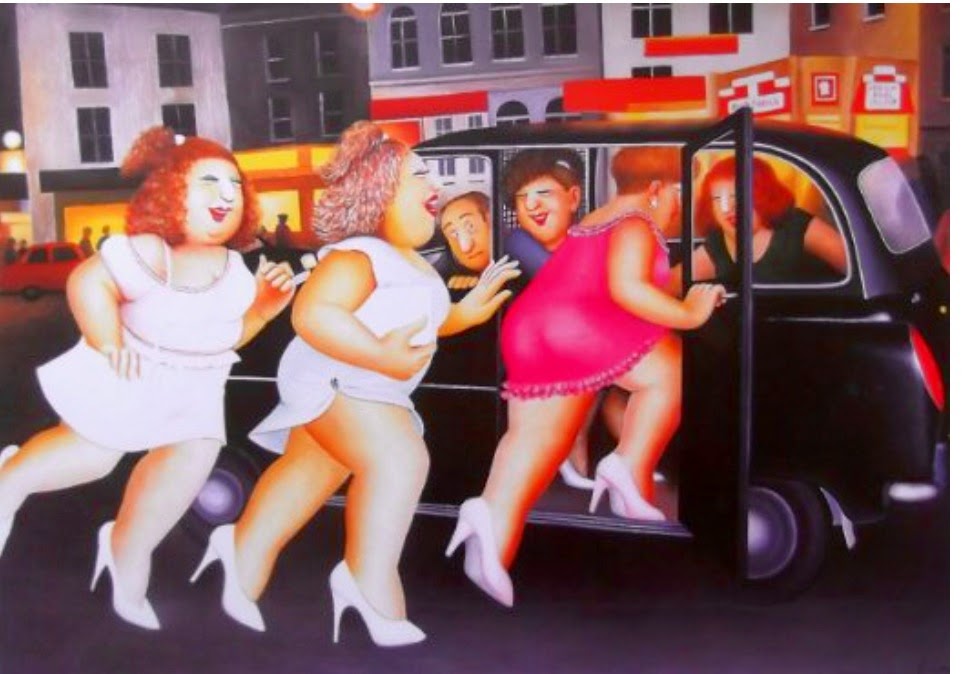 Girls in a Taxi 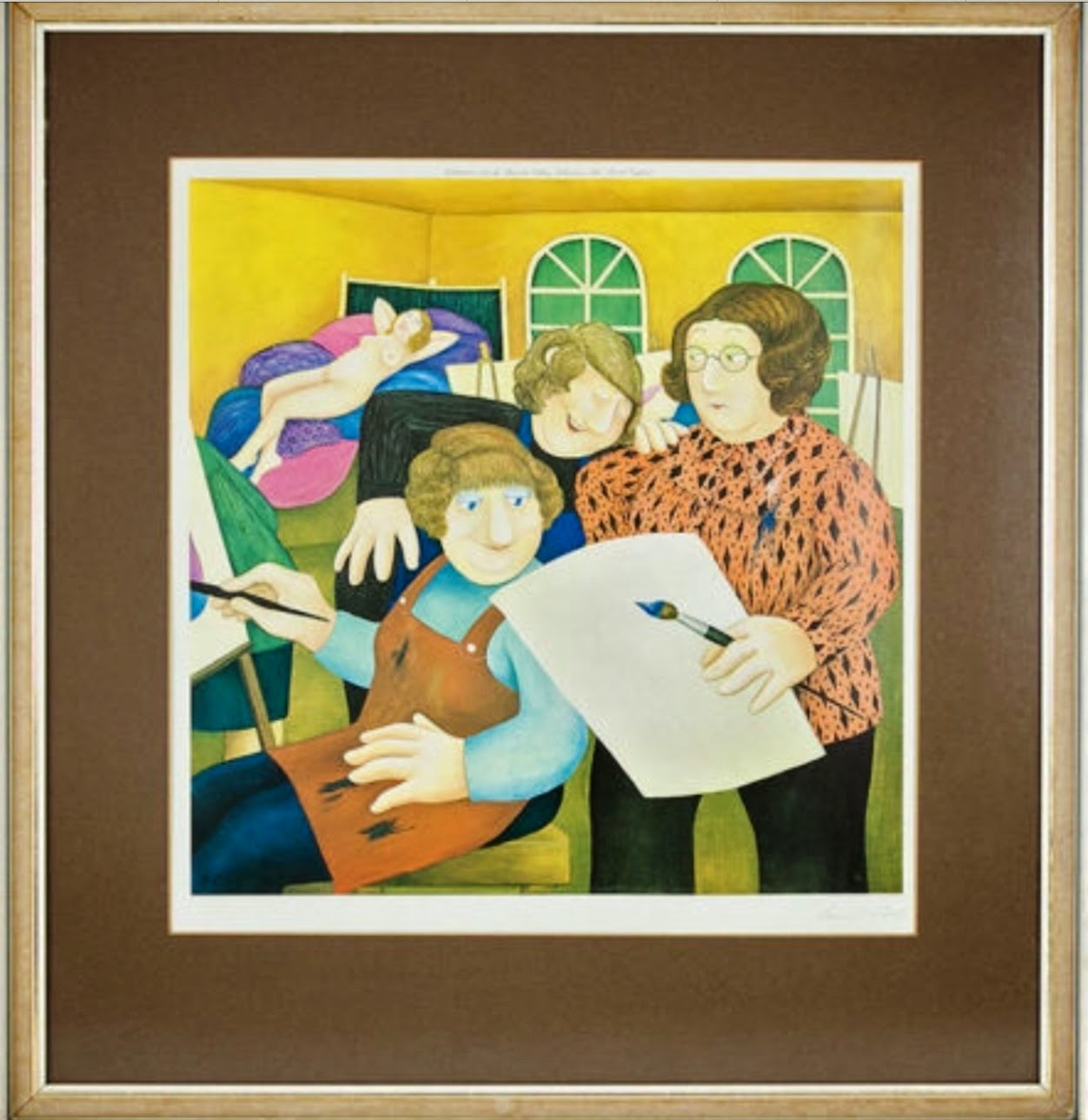 Directly from Wikipedia:
"Beryl Cook,(10 September 1926 – 28 May 2008) was an English artist best known for her original and instantly recognisable paintings of people enjoying themselves in pubs, girls shopping or out on a hen night, drag shows or a family picnicking by the seaside or abroad – tangoing in Buenos Aires or gambling in Las Vegas. She had no formal training and did not take up painting until middle age. She went to Kendrick Grammar School located in Reading, Berkshire, England.
Cook was a shy and private person, often depicting the flamboyant and extrovert characters she would like to be. She had an almost photographic memory.
Cook started painting when living in Southern Rhodesia with her husband and young son, and     continued to paint on returning to England during the 60’s, but only began to sell her work in the mid 70’s
She found new material for her work while travelling. Early local scenes expanded those depicting Buenos Aires, New York, Cuba, Paris and Barcelona. 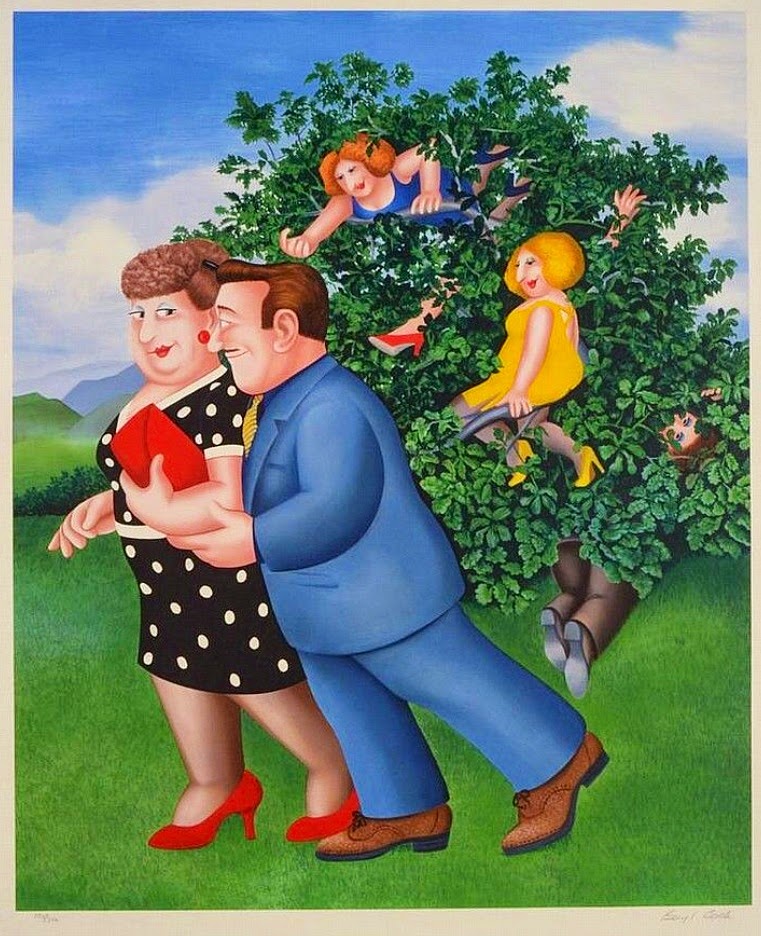 Cook admired the work of the English visionary artist Stanley Spencer, his influence evident in her compositions and bold bulky figures, as well as several of her pictures depicting a similarly religious aspect; e.g. Noah, The Virgin and Jonah & The Whale. Another influence was Edward Burra, who painted sleazy cafes, nightclubs, gay bars, sailors and prostitutes, although, unlike Burra, she did not paint the sinister aspects of scenes. She was described by Victoria Wood as "Rubens with jokes". Beryl Cook's work can be seen in context with the British tradition of social realist painters and could be described as a twentieth century Hogarth or Gilray, although she had a more sympathetic view of the human race. She was, like them above all a social observer. In 1979 a film was made about Beryl Cook for LWT's South Bank Show. The TV company Tiger Aspect made two half-hour award winning animated films of Beryl Cook's irrepressible women who meet at Plymouth'sDolphin Pub. Entitled 'Bosom Pals' had an all star cast of voices with Dawn French, Rosemary Leach, Alison Steadman andTimothy Spall. They were screened on BBC1 in February 2004.
The Red Umbrella Beryl Cook was made an O.B.E. in 1995. In 2005 Channel 4 News presented a short film of Beryl and her work, she was also the featured artist in The Culture Show in 2006. Beryl Cook's paintings have been acquired by Glasgow Museum of Modern Art, Bristol City Art Gallery, Plymouth Art Gallery and Durham Museum. The Baltic, Gateshead had a major Beryl Cook Exhibition in 2007, and a full retrospect exhibition was put on by Plymouth University after her death in November and December 2008. In 2010 several of Beryl Cook's paintings were loaned to Tate Britain for their exhibition 'Rude Britannia – British Comic Art', Bristol City Art Gallery and Museum held a retrospective exhibition in 2011. 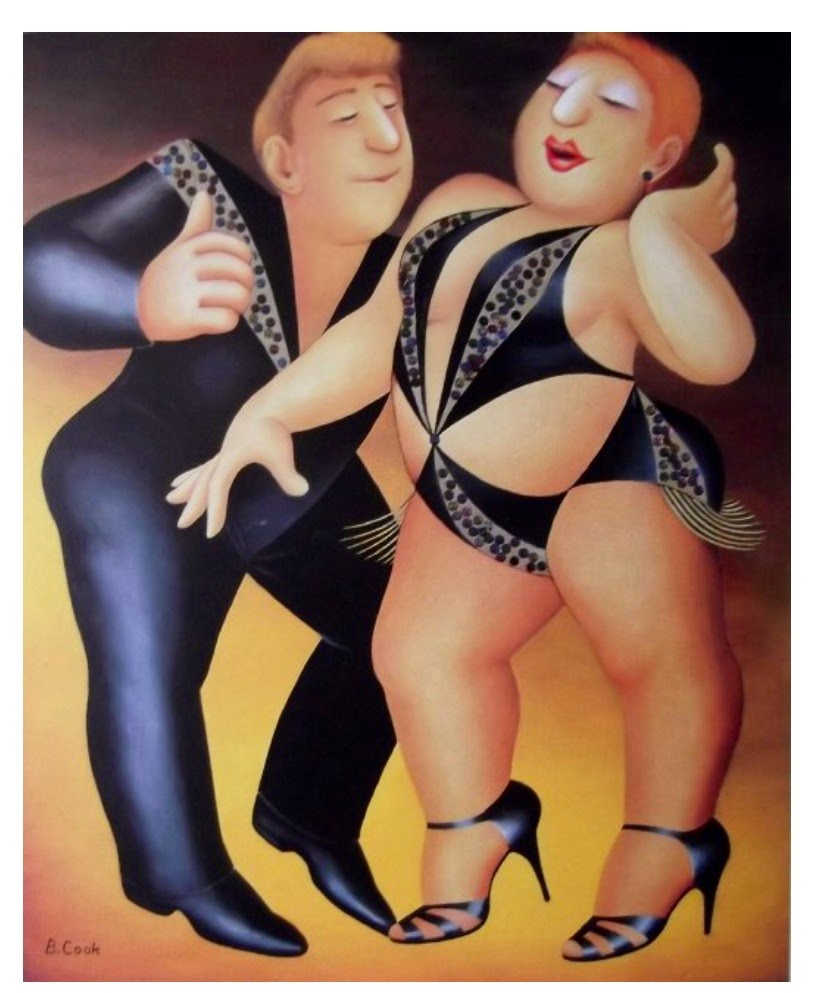 None of these photos or background articles are mine; nothing is my own work except for the first paragraph.  All information is from:
www.wikipedia.com
www.berylcook.com
www.amazon.com
www.cheap-r.com
www.berylcookprints.com
By Carol Ann Kauffman's Vision and Verse at Wednesday, April 18, 2018