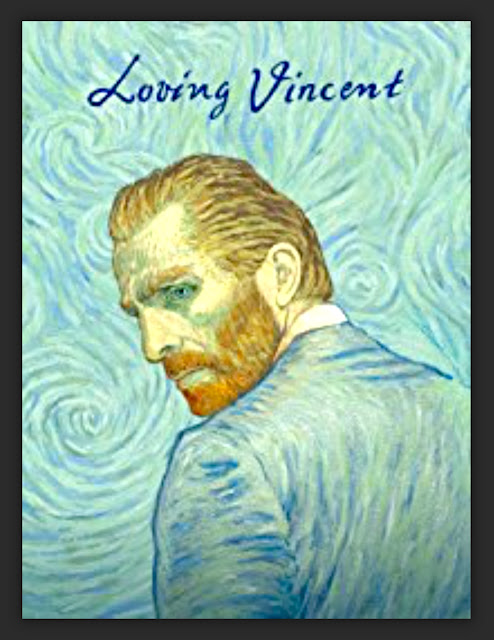 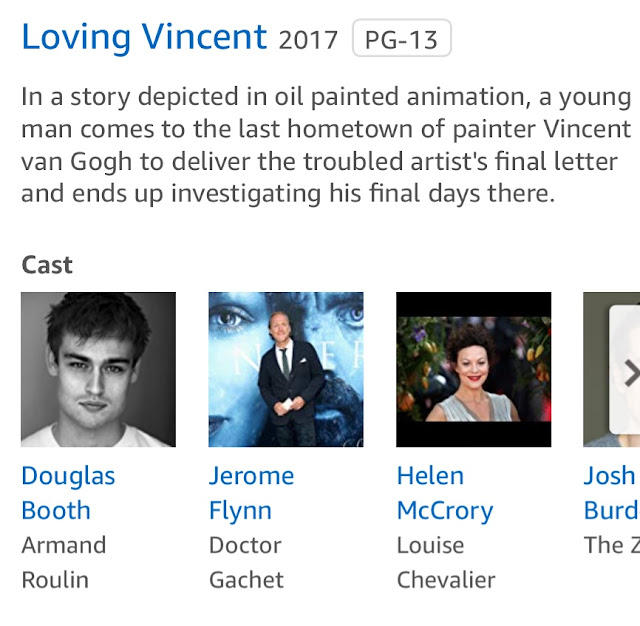 If you haven't heard of the movie Loving Vincent, I want to encourage you to seek it out on video or wherever you stream your entertainment.
We'd read about this motion picture animation about the final days of Vincent Van Gogh, where each cell in the animation is an oil painting. We followed it's progress closely as it was seven years in the making. We were so excited to see it on the big screen, all 65,000 frames. But this world's first fully painted feature film never made it to a theater anywhere near us. So I bought it on Amazon for my husband's birthday.

It is absolutely wonderful. The casting is exceptional. Eleanor Tomlinson (Demelza on Poldark), Saoirse Ronan (Brooklyn, Hanna, Lady Bird), and Douglas Booth to name a few. Even Aidan Turner (Ross Poldark) shows up as the Boatman. The artwork is breathtaking. And the music!

It is the story of a letter Vincent Van Gogh wrote to his brother Theo before he died The story, the cast, the music, and the wonderful paintings lift this feature film to a must-see masterpiece.

The postmaster in the little French village where Vincent was staying before his death mailed this letter twice, and twice it was returned. So the postmaster sent his son to personally deliver the letter to Theo.

5.0 out of 5 starsFlatly Astonishing
Format: DVD

“Loving Vincent” takes an enormous step forward in motion picture entertainment, and does it by essentially taking a major
technological step backward.Dramatically, the picture is sound enough: The year is 1891, one year after the death by suicide of
artist Vincent Van Gogh. A postman and former acquaintance of the Dutch painter is in possession of his last letter to his devoted
brother Theo—previous attempts to deliver the document have failed.
So the postman charges his skeptical and indifferent son with personally delivering the letter to Theo. And as the son attempts
to locate Van Gogh’s brother, he begins to suspect that the artist’s death was not a suicide at all, but the result of a murder. In the
process of learning the truth, the son develops an appreciation of Van Gogh, his art, and his short life.
That’s the plot of the picture, which is involving enough in itself to sustain the viewer’s interest for its 91-minute running time.
But the big news is that “Loving Vincent” is an animated picture—the very first in motion picture history to be composed entirely of oil paintings, a logistical feat even Disney has never attempted.
Directed by the husband and wife team of Dorota Kobieta and Hugh Welchman, each of the movie’s 65,000 individual frames is
rendered in oil-on-canvas, produced using Van Gogh’s technique, and painstakingly created over four years by some 115 artists
selected from over 5000 applicants.
To augment the impact of the picture, the filmmakers chose to use classically-trained artists rather than traditional animators.
And each painting created for the picture was individually photographed in succession, to create the illusion of movement.
The results are flatly astonishing. After a moment or two for the viewer to acclimate himself to the static nature of the animation—
the brushstrokes on the individual paintings change from frame to frame, giving even stillness the appearance of constant movement
—the overall effect is of witnessing the works of Van Gogh come miraculously to life in all their exuberance and vibrancy, to both
tell a story and lead the viewer on an unforgettable journey into art history…and art itself.
“Loving Vincent” accomplishes in its 91 minutes what some art history appreciation courses cannot manage over a period of weeks,
months, or even years—an intimate familiarity with the creative process, and the emotional investment which is sometimes required
to create the world’s great art.
This movie is a real treat. Watch for it.

5.0 out of 5 starsIncredible film worth the years of waiting for its release.
Format: Blu-ray|Verified Purchase

**NO spoilers in this review** just my opinions of the art and quality of content.
Absolutely unique and incredible film!! They truly captured Van Gogh as a person-not only through the story they told-but with
the artwork they told it with. I'm so glad I purchased this because it is one of those films that I will be watching over and over.
There's so much to take in.
I've been following this film and the creators for years, so I was extremely excited for it to finally get released. The artwork was
mesmerizing. I had to watch it twice in a row because I would get caught up in the animation and not pay attention to what was
going on! Just knowing that every single frame of this film was hand painted is mind-blowing (12 frames/second). I have such
great.
5.0 out of 5 starsGround breaking film offers a fresh look at both Van Gogh's paintings and his death
Format: DVD|Verified Purchase

"Loving Vincent" offers the public an alternative version of Van Gogh's death and a unique look at his art as scenic environments.

This visually stunning and ground breaking film will cause viewers to take a closer look at both the man and his paintings.
Unlike most animations in which the background is textured and the figures are painted in flat paint cells, this animation paints

the figures and faces in Van Gogh's expressionist style making each cell a true painting. Not every frame works but the number

of iconic paintings that are animated in the film is thrilling to see.
The murder mystery plot is also engaging, offering an alternative explanation for Vincent's death than suicide which is commonly
accepted. I have been convinced that Van Gogh was killed after I read Naifeh and Smiths' book "Van Gogh,The Life." The film

after production began, is not incorporated in the film. Murphy's book offers expanded research on his ear cutting incident and

Van Gogh's mental state the year before his death. Together this film and these books offer a deeper picture of Van Gogh's life