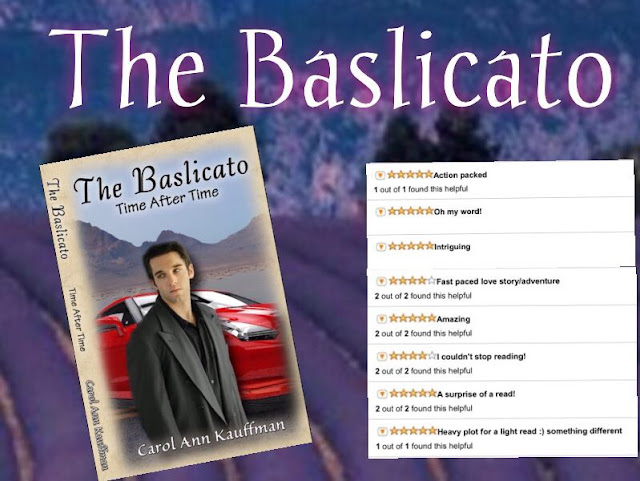 When Dr. Brook Wilson agreed to take on celebrity Italian race car driver Jason Maxwell, known as "The Baslicato," as her patient, little did she realize their relationship would turn her calm, pleasant, well-ordered life upside down, sending her off on dangerous adventures in southern Italy and northern Ohio.

As she prepares him for his big race, she must deal with his demented wife while driving her boyfriend, Dr, Garrett MacEgan into acts of criminal desperation in a attempt to hold on to her.

When tall, handsome British actor Richard MacKenzie wakes up in the hospital after an accident, he discovers he's a short Italian race car driver named Jason Maxwell, known as THE BASLICATO.


Basilicata is a province in Southern Italy. It's where my father was born. The Baslicato is the story of a young man born in Basilicata Province, but not my Dad. He did, however, like to drive very fast! The warmth, love, and humor of a big Italian family is evident in this story. I think Dad would've liked it.


“Mr. Maxwell? Mr. Maxwell, I’m Dr. Wilson. I’m a neurologist. Your father called me in as your specialist.”
He stirred. He opened his eyes and gave her the most beautiful smile she had ever seen in her life. It was heart stopping. And those eyes! And just where have YOU been all my life,she thought to herself, surprised by her own reaction to him.
“Hello, my love, I am so glad you’re here. I’ve been calling you. Did you hear me?” He reached for her and pulling up toward her, hugged her middle tightly, burying his head in her breasts, and leaving her momentarily stunned.
“Oh, my head hurts. Nothing makes any sense. What happened to me, do you know? Did they tell you anything? They won’t tell me a damn thing. They just tell me to rest,” he said.
She hugged him back just enough to hit the button on the other side of his bed. Her two assistants came in and pulled him off of her.
“Nicole, love, what’s the matter? What’s wrong?”
“Mr. Maxwell, listen to me carefully. I am afraid you have me confused with someone else. I am your new doctor, Dr. Brook Wilson. Now, are you going behave and keep your hands to yourself or do I need to restrain you?”
He looked at her and blinked. He became very agitated.
“Nicole? Keep my hands to my… What’s the meaning of this? You know me! You know who I am. Richard. Richard MacKenzie, your husband, not some… Mr. Maxwell. And you are my wife, Nicole,” he said unwaveringly.
He paused and thought a moment and began to doubt himself. “Oh, what’s the matter with me? Nicole! Why don’t you know me? My God, will this bloody nightmare never end?”
He held his head with both hands, visibly shaken.
She very gently injected him with something to calm him down, to make him sleep a little, and give her some time to figure out what was going on here.
She didn’t let him see the needle. Somehow, she knew he hated needles. She noticed he was dehydrated. What had happened to him? What had they done to him? She checked his chart. He didn’t come in through the regular emergency room route and he had not been given any kind of preliminary examination. And she wanted a thorough one.
“Where are his personal belongings?”
By Carol Ann Kauffman's Vision and Verse at Thursday, August 30, 2018