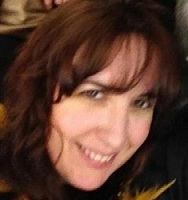 What have you written?

My published works are Pulse and Prejudice—the paranormal adaptation of Jane Austen’s classic—which retells the story from Mr. Darcy’s point of view as a vampire. (Austenprose Readers’ Choice Top 5 Book of 2012); the contemporary romance All My Tomorrows, selected a 2013 Amazon Breakthrough Novel Award Semi-finalist; and my new release, the romantic suspense thriller, Alicia’s Possession.

Literary and metaphysical fiction, but I haven’t published in those genres yet!  So I would have to say Romantic Suspense.

My goal is to visit all the continents, and I only have Australia and Antarctica remaining.

How old were you when you started writing?

I was reading and writing even before I began kindergarten, but I wrote my first short story in the third grade when I was eight. By junior high, I wrote novellas that my classmates would pass around.

Anything can be an inspiration. With my new release, Alicia’s Possession, my daughter had just bought a house on a lake that got my creative juices flowing. All My Tomorrows resulted from an argument I had with my other daughter. For Pulse and Prejudice, I wanted to do something that hadn’t been done before. I had read adaptations of Pride and Prejudice from Darcy’s point of view and a vampire variation, and I decided to blend the two.  My current work in progress, The Widow?  I’m keeping the inspiration a secret for now.

First, I try meditation, which is how I work out any scene anyway. If that doesn’t work, I use a technique called proprioceptive writing. I took a workshop on it, and it is an amazing tool to get your juices flowing. If all else fails, I go to Amsterdam.

Best book you ever read.

Who is the one person who has influenced your personal life the most and why?

It cannot be one person because I had twins. My children completely changed my life. From the moment they were born, I didn’t make a single decision, I didn’t move, without thinking of how they would be affected. They were the primary motivating factor in most of my behavior until they left home.  Even today as adults, they still influence me. I want their happiness more than I want my own.

John Lennon. Although Pink Floyd is my favorite band, The Beatles are a close second. I think I might love George more, but I have always felt a certain affinity with John, like we shared a certain level of insanity.  In Strawberry Fields, he wrote, “No one I think is in my tree, I mean it must be high or low;” but the original lyrics were that no one was on his wavelength; everyone was either higher or lower. He changed it to make it more esoteric. I empathize with him and that feeling, especially when I was growing up and had trouble making friends. Of course, I can always fall back on another line from that song:  “Living is easy with eyes closed, misunderstanding all you see. It's getting hard to be someone but it all works out. It doesn't matter much to me.”

Colette is the bestselling author of Pulse and Prejudice—the paranormal adaptation of Jane Austen’s classic—which retells the story from Mr. Darcy’s point of view as a vampire. Colette was selected a “2013 Amazon Breakthrough Novel Award Semi-finalist” and Austenprose's “Debut Author of the Year” for 2012.
Colette has been writing poems, short stories, and novellas since grade school. Her interest in literature led her to marry her college English professor, but eventually a love of history encouraged her to trade up to a British historian. Technical writing has dominated Colette’s career for the past twenty years, but finding little room for creativity in that genre, she dedicated 15 months traveling to Europe and Britain, researching Regency England and vampire lore and literature, to complete her first full-length novel Pulse and Prejudice. She is currently researching and writing a sequel entitled Dearest Bloodiest Elizabeth set in Antebellum New Orleans, as well as the romantic suspense thriller, The Widow.
Colette lives in South Louisiana with her historian husband and their two dogs.
www.facebook.com/ColetteSaucierAuthor
colettesaucier.blogspot.com
www.colettesaucier.com 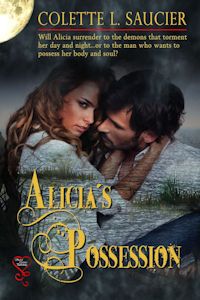 About Alicia’s Possession
Haunted by a traumatic accident and her husband’s betrayal, Alicia believes she can never trust again. Now she must surrender her will to Mason if she wants to find out if the bizarre events terrorizing her are the work of the paranormal, her own paranoia, or something far more sinister.

After recovering from a freak car crash that put her in a coma and left her with no memory of the accident, wealthy socialite Alicia Pageant becomes convinced there is a connection between the mysterious disappearance of her neighbor and a series of bizarre occurrences inside her own house; but everyone—including the detective called to investigate—thinks the woman’s head injury has left her unable to distinguish reality from fantasy.

As Detective Mason Crawley investigates this “suspicious incident,” Alicia’s palpable sadness and vulnerability awaken his instinct to protect her and lead her into the light; but when her story begins to unravel, each new piece of information creates more questions than it answers. He begins to wonder if he is falling in love with a woman who is a witness to a cleverly-concealed crime, dangerously delusional, or a murderer.

“A great story. It's got everything—sex, crime, cops, more sex, a twisted mystery, knot tying, and a superb denouement.” — Chuck Hustmyre, screenwriter and bestselling author of THE AXMAN OF NEW ORLEANS