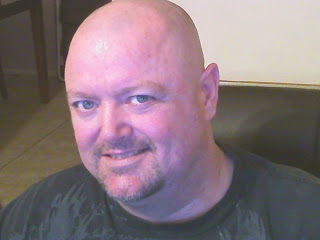 
Okay, now I'm curious, does the E stand for Elvis? And what part of the country do you now reside?

No.  Only those close to me know what the E stands for.  I use my middle name for everything.  And I currently reside in Goodyear, Arizona.  That is subject to change in the future.  It's just too damn hot here.

What have you written?

I've written several short stories and some poetry.  I won the October 2001 Editor's Choice Award for a poem that was published by the International Library of Poetry in a book called Taking Flight (page 90).

I love writing Fantasy.  Along the lines of Shannara, The Wheel of Time and Lord of the Rings.  However, I have one WIP that is Science Fiction and another that is Paranormal Science Fiction.

I'm a Meat and Potatoes kind of guy.

I would love to visit the UK.  I have friends there that I'd like to meet in person.

There are so many great artists out there.  Ozzy is one that comes to mind.  There's this new kid, he's already a hit in Australia, that is really good.  His name is Frank Dixon.  Search for him on YouTube, you'll like what you hear.

How old were you when you started writing?

The first story I ever wrote was in fourth grade, so I guess I was nine.

Everywhere!  There is so much out there that can inspire us.  If you look around you, right now, you could pick anything up and get inspiration.  For instance, my coffee cup inspires a scene where two women are sitting at a coffee shop arguing about which is better, a latte or a cappuccino.

I go back and read the story I'm writing.  I edit it, I fluff it up if needed.  I'll do this one section at a time, then go back to where I'm stuck.  If I'm still stuck, I'll rinse and repeat until the block is gone.  It has never failed me . . . so far, anyway.

That's a tough one.  I would have to say Dean Koontz.  It was Phantoms that got me hooked on reading.  However, Terry Brooks is right up there with him.

What the best book you ever read?

The best stand-alone I've ever read is Phantoms.  The best series is a toss-up between Landover, by Terry Brooks, and The Wheel of Time, by Robert Jordan.

Who is the one person who has influenced your personal life the most and why?

My mother, Rustye, is my greatest influence.  She raised me to be honest, caring, and respectful.  She taught me to follow my dreams and to never give up hope.  Even though she's passed on, I still endeavor to make her proud.  Yes, I'm a Momma's Boy and I miss her, dearly.

I would love to sit down with Terry Brooks.  If I could get him to do a review of my debut novel, Shad'rah (coming soon), it would mean the world to me.  If his review consisted of constructive criticism, I would take it to heart and learn from it.  If his review turned out to be praise of my work, it would be icing on the cake.  I've always dreamed of being a writer.  Included in that dream is being validated by Terry Brooks.

Never give up on your dreams.  Do not worry about what others may think.  Write to please yourself, not the readers.  I say that because if you're not happy with what you've written, you can't expect the readers to like it.  Above all else, do NOT let a negative review slow you down.  Not everyone is going to like your work.


Do you have any links you'd like to share with us?
Neil Orr's Author Page
Shad'rah - Chapter 1 preview