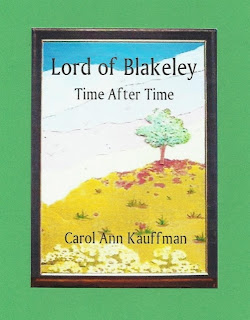 Synopsis:
LORD OF BLAKELEY is the story of Andrew, a simple farm boy who rises to be the most powerful man on the planet.  He marries a lovely princess, incurring the wrath of a jealous, devious man.
It is the story of Princess Aleese, who is expected to marry the son of her guardian, but instead sets out to find the man of her dreams, this soulmate, this one true love of yours, and ends up in farm country.
It is the story of a sister and brother whose home world was embroiled in a catastrophic civil war, and were sent away for their own safety and protection.
It’s the story of time travel and mobile transport devices.  It’s about the legal system in Chicago, rock planets, and blue magic.
It is, in typical Time After Time fashion, the story of love.

“I’m going in to get her,” he said calmly and quietly.
“No, Lord Andrew, it’s too dangerous.  They’ll kill you, and not right away.  If that bastard Samuel Bishop and his men find you before you find her and get back here, you know what they will do to you.  You need to re-think this course of action.  At least let’s wait until morning.  Then Carmine will take a team and go in and get her.  You need to stay here.  We need you.  You shouldn’t go.  And you definitely shouldn’t go alone,” Jared warned.
“No.  I’m going in after her.  Now.  Her safety always comes first with me, you know that.  I’ll be able to find her, Jared. I know I will.  And rescuing MY woman is MY job.  Unlock the transport dock and have a security team stand ready.  What were the last signals?”
“Three in, four out.”
“Damn it!” he said holding his head.  “How did they manage to get in here with the aperture closed?   And nobody saw or heard anything?”
“Well, Ruth said Lady Aleese was called out to help a baby burning up with fever.  You were asleep.  She didn’t want to wake you.”  He shook his head in dismay.  Yes, Aleese would go running out to help.  And no, she wouldn’t want to wake him.
“Once this link is opened, who knows what evil may come rushing through that eye.  Security team in place, now.  I’ll be leaving as soon as possible.”
Jared left to ready the transport dock and alert a security team.  He was pushing buttons and flipping switches.
“Carmine, we need a security team to the transport room right now.  He’s going in after her.  I couldn’t talk him out of it.”
“We’re on our way, Jared.  We knew he’d go.”
Within minutes, Andrew, Lord of Blakely strode calmly and confidently into the transport room, followed by a security team taking aim at the aperture.  Andrew stood inside the transport dock.
“I’ll be back within the hour with Aleese.  Stun anyone or anything else comes through this aperture, full stun, and lock them up until I return.  I will deal with them personally.  Tell no one I have gone,” said Andrew.
“Weapons on maximum stun,” Carmine ordered his team.
“I understand,” said Jared.  “When the Lord of Blakeley goes tearing off alone in the middle of the night on a doomed, dangerous, foolhardy mission to rescue his Lady who has been stolen in the night, it promotes fear and panic among their loyal subjects who love both dearly.  This is a sad day for Blakeley, Lord Andrew.  We could lose the both of you tonight.”
“Enough.  Bishop is an animal.  She’s terrified of him.  I have to go right now.”
“It’s a trap.  You know it’s a trap.  Bishop is using her as bait.  They came sneaking in here and stole her away in the middle of the night just to piss you off!”
“Oh!  It worked.  And I’m going in.  But it’s not me he wants, Jared.  He wants her.  And now… he’s got her.  But not for long.”
“Okay,” sighed Jared. “Good luck.  Be careful.  Go get her and bring her home.  Godspeed.”
“Thank you.  Open.”

Hold on, My Sweet Aleese.  I’m coming to get you.

Jared opened the aperture and Andrew ran into it.  The very next moment a shadowy form shrouded in a grey monk’s robe came rushing out.
“Fire!” ordered Carmine.  All weapons fired at the shadowy figure as it fell silently to the ground, gyrating from the multitude of stungun blasts.
“Oh, damn it!  It’s Lady Aleese.  Jared, can you call him back?”