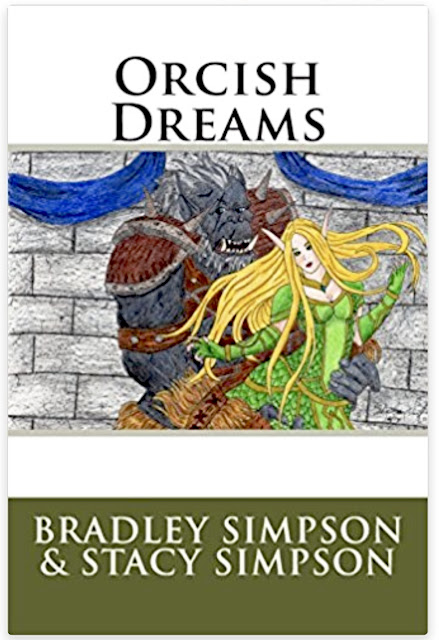 Description: An elf prince slays an orc king and becomes cursed to transform into what he hates the most: an orc. Centuries later, he has at last discovered true love. No one said it would be easy however to find happiness.

Excerpt:
Anastasia's heart skipped a beat when the massive orcish fellow ducked his head to come inside the tent. Broad shoulders, big muscles and a face that had numerous scars upon it. She had never been one to faint away or cower in fear. Her hand came up out of the bath for a handshake.
"Hello. My name is Anastasia Stronghold. Who do I have the honour of addressing?"
The orc bent down and kissed her hand softly like a noble knight. "I am commonly known as the Duubok or Orcish Boogieman," at the sound of that Anastasia giggled, "by my true name is Veldane."
"That is a strange name for an orc." Anastasia continued washing as if he was not even in the tent. She unabashedly raised a bare leg over the side of the tub showing Veldane lots of pinkened elvish magnificence. As she was conversing about the one-sided battle, she stood up in the tub providing him with a view of sanctimonious delight. She began to dry herself off with a towel before reaching for her heavy robe. Veldane stared in wonderment; he thought it unlikely this lady elf had ever been claimed by a man. She shivered and did a cute little sneeze as she settled into her robe.
Veldane's jaw was wide open for several moments in sheer bewilderment, but finally remembered what he was going to say, "I am a rather strange orc but that is my name."
"Water is still hot. By all means, help yourself." Anastasia's nose crinkled in a cute fashion, "We owe you our lives, but you are stinky."