Excerpt from The Captain and the Ambassador by Carol Ann Kauffman 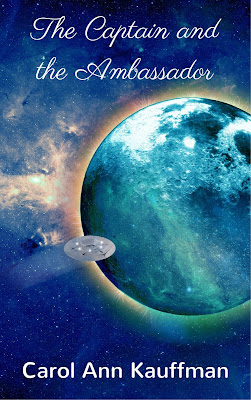 The Captain and the Ambassador was a departure from my normal contemporary romantic adventure novels. And although the locale for most of the story is interplanetary space, the story revolves around two people: an ambassador retiring from a twenty-year career as a peace negotiator, and a starship captain who is considered the bad boy of the quadrant because he doesn't follow the rules.

Chapter One
A New Passenger

“Captain Jacobs? Sir, big news. Ambassador Tull Redmond is meeting us at Bridgeport Seven tomorrow and will join us as ourpassenger all the way to Earth,” said second-in-command Commander Zack Mankewitz of the Earth Starship Giuseppe Verdi.
“Ambassador Redmond,” repeated the captain. “Oh, I’ve heard ofhim, Commander. He’s the peace, love, and hope guy. He’s the mostsuccessful intergalactic mediator in this quadrant. Wow, my very first five-star passenger. Yes, that is big news. I’m glad I didn’t miss him. High Council’s never trusted me with a big wig before.”
“Yes, sir. I know.”
“So, the ambassador and I will be going home to Earth at the same time. Well, I’m not sure the Ambassador is Earthite, I justassumed. Is he retiring, too, I wonder?
“Well, sort of. From what I hear the ambassador refused to sign another ten-year contract, so resigning from intergalactic mediation isthe only other option. You two are lucky ducks.”
“Luck had nothing to do with it, Commander. It’s plain, old- fashioned endurance. Any special dietary requests? I heard the ambassador was a vegan.”
“No. No special food requests, but a full bathroom in quarters, and the ambassador is a woman. She’s also requested a room with a space view.”
“You’re kidding me? I’ve seen him, eh, her, from a distance. Short, pale, roundish, light-colored hair slicked back or something. Hair was hardly noticeable. Wears a big, long, hooded, monk-like robe. Kind of like a roundish beige ball. A non-sexual being.”
“Does that matter?”
“No, I guess not. The ambassador gets the job done. A full bathand a view, huh? Well, there is only one accommodation like thataboard this ship, and that’s mine. Damn. My first five-star passenger and she kicks me out of my quarters. Oh, well. Go ahead and assignher to Captain’s Quarters, Commander. She’ll enjoy the view in thesitting area as well as the full bath. I’ll take the quarters next to mine. I don’t mind sonic showers. I’ll move my things over this evening.”
“Do you need help, sir?”

“No, thanks, Zack. I don’t have much to move. But send someonein to give the place a good cleaning and shine it up a bit. Change all the linens. Put a little welcome note or something inside. I want my first and only five-star passenger to be impressed with her deluxe accommodations, if nothing else, on this tugboat for her four-month stay with us on her way back home.”
“Yes, sir,” chuckled Mankewitz.
“Ambassador Redmond, welcome to the Giuseppe Verdi, a classone intergalactic Earth Starship. It is my pleasure to have you aboard,ma’am.”
“Thank you, Captain Jacobs.”
“You’re my first five-star passenger in a twenty-year career.” “Yes, I’ve heard. I’ve been duly warned.”
“You have?” Captain Jacobs laughed.
“Yes. High Council strongly urged me to wait for the next
Earthbound starship, which is scheduled for early next year. They say you are the juvenile delinquent of the quadrant. They say you think therules don’t apply to you and you love to defy authority.”
“And yet, you came aboard my ship anyway. You are a brave soul as well as a successful negotiator, Ambassador.”
“Thank you, Captain. I’m not afraid of bad boys. Your safety record is exemplary. You’ve never lost a passenger or crew member.Upper management may not admire your quirky leadership skills, or your less than organized reports, but your crew holds you in the highest esteem. So, you like to bend the rules a bit, big deal. You like tocut through the nonsense, that’s fine with me. You allow your crew to become far too familiar with you...”
“And my passenger, too,” he winked, “if you’re interested.”
She ignored it. “You hate quarterly reports, so what? All I ask isthat you get me to Earth in one piece.”
“Thank you for your confidence in me. I promise I’ll get youthere, safe and sound. And I promise to be on my best behavior whileyou’re aboard my ship. May I escort you to your quarters?”
“Yes, thank you, Captain.”
“Were you born on Earth, Ambassador?”
“Yes. Eagle’s Landing, Ohio. Midwest United States.”
“And your parents, they were both from Earth?”
“Yes.”
“Are you a member of a religious order then, Ambassador?”

“No, Captain. What made you think that?”
“The ‘peace love, joy’ stuff. The non-violence lifestyle. The robe.” “So, you have something against peace, love, joy, and non-
violence, Captain Jacobs?”
“No, ma’am, I do not,” he giggled. “Maybe the robe, though.” “I’ve been a member of the Society of Peace and Light for the last
six years. It’s not a religious order, Captain. It’s a chosen lifestyle.” “And what exactly does that particular chosen lifestyle entail?
Yoga? Essential oils? Meditation? Veganism? Celibacy? Power crystals?Tea leaf readings? Tinfoil head cones?”
“I’ll forward you some information on the society if you’re interested. It was very helpful to me while I was mediating.”
“And now that you’re leaving intergalactic mediation, what will you do?”
“Now I’ll be making some changes.”
“If one of those changes happens to be a big, juicy burger on a toasted homemade bun with melted cheese and all the fixings, I’m your man.” He winked again. “I grill them up for my crew on Thursdays inthe dining room and you are invited.”
“You get ground beef out here?”
“Domesticated livestock from whatever’s in the area. We haven’t had Earth meat for so long, we’ve all forgotten what it tastes like. Right now, Resa, our cook, has a supply of Plumarian yak. Yummy.”
“Thank you, I’ll keep that in mind, Captain.”
“And your Earth parents from Ohio? They named you...Tull?” “Getting rather personal already, aren’t we? What is your first
name, Captain?”
“Ben. Benjamin Joseph Jacobs. My childhood friends called me
BJ. Or Beej. And your first name is ...?”
The Ambassador remained quiet.
They came to the Ambassador’s new quarters.
“Here we are, Ambassador. It is the finest accommodation aboard
the Verdi. Full bath, quiet, away from the noise of engineering and the recreation hall. Observation window in the sitting area overlooking the beautiful blackness of space. Just as you requested. The rooms arespacious. And that’s a great bed,” he pointed.
“Thank you. It’s just perfect. And now if you don’t mind, Captain, I’m thoroughly exhausted. I’d like to rest now.”

“Of course. Digital control panel here. It’s also voice-activated. I’ll help you set it up later this evening, after you’ve rested. And when you’re ready for a little walk outside on the pressurized deck, I’ll be happy to take you. But we’ll need to be tethered to the platform. Any atmospheric disturbance, no matter how small, could weaken the edgesand send you catapulting into space.”
“Yes. Thank you. Goodbye now.” She motioned toward the door.
“Yes, I’m going. Now. I’ll see you later. Please feel free to call upon me for anything you may need during your stay with us. Have apleasant rest, Ambassador.”
“Well, Captain, what do you think of the Ambassador?” whispered Zack when he met Ben walking down the corridor back toward the Bridge.
“You know, I like her.”
“Oh, that’s a surprise,” teased Zack.
“No. This is different. She’s different. She’s...more. A strange
combination of Mother Earth and a 1960’s Flower Child Peace-nik and something else I can’t quite put my finger on.”
“Yet.” Zack laughed. “But I’m sure you will.”
“She has a serenity about her. Interesting person. But that robe? Ugh.”
“I think maybe you want to get a peek at what’s under that huge yardage of beige material,” giggled Zack.
“No, Commander. That’s completely ridiculous. Well, maybe alittle bit.”
An hour later, the Captain returned to the Ambassador’s quartersand rang the Enter button.
“Ambassador? It’s me, Captain Jacobs. May I come in?”
“No, thank you, Captain.”
“Did you have a nice rest?”
“Not yet.”
“I’d like to talk to you for a moment. May I enter?”
“Not now, Captain.”
“It’ll only take a moment.”
“Captain, what do you want?”
“I...I would like to help you set up the digital system with your own voice command. It’s a little tricky.”
“It’s done.”

“You did it yourself?”
“Yes, Captain. It wasn’t difficult.”
“Well, okay then. How about some dinner? Are you hungry? I can
show you the way to the dining room.”
“There’s a map on the ship’s digital home screen.”
“So there is. I just thought...”
“Captain, please forgiven my bluntness, but I am tired and I’m not
in the mood for company.”
“But I think you may be hungry. I’ve noticed women tend to get
angry, aggravated, and maybe a little curt when they get hungry.”   “And dealing with a persistent sexist middle manager doesn’t lead
to anger, aggravation, and curtness aboard your ship, Captain?”     “Sexist? Middle manager? I assure you I am not a... I was only
trying to...”
“Captain, listen to me very carefully. Go. Away.”