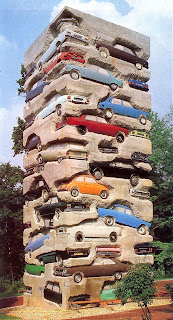 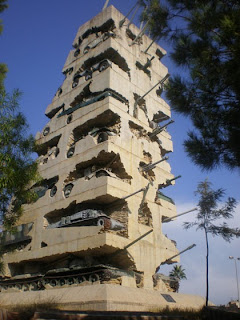 Arman,  (Nov 17, 1928 -  Oct 22, 2005)  was a French-born American artist.  Named Armand Pierre Fernandez at birth, he began life in Nice, France.  His father, Antonio, was a painter and photographer who taught his son about both art forms.  In 1946 Arman received his bachelors degree in philosophy and mathematics.  He then enrolled in the
Ecole Nationale des Arts Decoratifs.  He graduated in 1949 and went on to study at the Ecole du Louvre in Paris.  There he delved into the study of archaeology and oriental art.  After finishing his studies he served as a medical orderly in the French military.
Arman was a painter who transitioned from using his painting tools to create art, to using the tools as his art.  He is also well known for dismantling objects and recomposing them in his work.  Arman believed in the concept of "accumulations",  large numbers of identical items arranged into one cohesive unit or work of art.  This would remain a constant element in his art.  Once of the opinion that his abstract paintings were of more importance than his accumulations,  public attention and reaction to his compositions convinced him of how powerful this art form could be.
Inspired by a German exhibition from 1954, he began his first major artistic endeavor which he called "Cachets".  By 1958 he was into his third solo exhibition in Paris.  He featured some of his 2D accumulations from "Cachets" which brought about a major course change in his career.
As an homage to Van Gogh, he initially signed all of his works with just his first name.  In 1957 he chose to change his name from Armand to Arman.  When he became an American citizen in 1973 he took the official name, Armand Pierre Arman.  Arman continued to be his public persona.
The years between 1959 and 1962 brought about his two most recognizable concepts, "accumulations" and "poubelles" (French for trash bins).  Accumulations amounted to concentrations of identical objects that he would organize either in polyester castings or in Plexiglass cases.  His first welded composition of like metal objects was created and exhibited in 1962.   Poubelles were arrangements of strewn refuse.  Arman's 1960 exhibition "Le Plein"   filled the Paris Galerie Iris Clert, with garbage, serving as a counterpoint to "Le Vide" ,  an exhibition there two years previous, by Arman's friend Yves Klein.  Both works made the European art community stand up and take notice.
Arman made his American debut in 1961.  He probed creating through destruction.  "Coupes" and the "Coleres" were works of burned, sliced, or smashed items organized on canvas.  Musical instruments were a major theme in these exhibitions.  He was enthralled with the New York art scene and after his 1961 exhibition at the Cordier Warren Gallery, he took up residence part-time at the Chelsea Hotel and soon after kept a studio in the Bowery.  Here he began working on large public sculptures containing furniture, automobiles, and other objects in various stages of dis assembly.
As one of the largest of Arman's accumulations, "Long Term Parking"  Is permanently exhibited at Chateau de Monteel in France.  The 60 ft high sculpture of 60 automobiles encased in concrete  was completed in 1982.  An equally impressive work created in 1995 for the Lebanese government and displayed in Beirut, honors 50 years of military service.  The work is titled, "Hope For Peace"  is a 105 ft monument comprised of 83 tanks and military vehicles.
In his personal life Arman married twice, first in 1953 to Eliane Radgue, and then to Corice Canton in 1971.  Between them he fathered 5 children.  In 1989, with Carrole Cesar he had his 6th child.
There are a number of interesting books about Arman worth checking out.
"Arman - Vol II:  1960 - 62"  by Denyse Durand-Ruel, 1991.
"Arman - Vol III  1963 - 65"  by Denyse Durand-Ruel, 1994.
"Monochrome Accumulations  1986 - 89"  by David Kuspit,  1990.
Image above left, "Long Term Parking",  sculpture by Arman 1982.
Image above right,  "Hope For Peace",  sculpture by Arman  1995.
By Vision and Verse at Friday, September 20, 2013