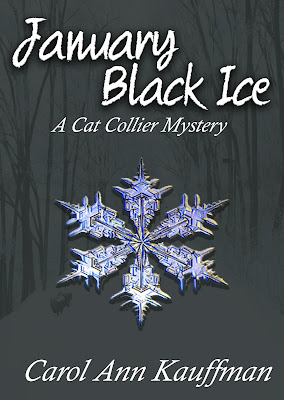 Mary Catherine Collier is called to the penthouse apartment of the city’s very rich, most influential lawyer, Detrick Bittmor. He has a very personal assignment for her. It involves a mysterious young man who sits on a park bench every day at noon and stares up at Bittmor’s top floor apartment.

Mary Catherine, or Cat, as she’s better known, has a soft spot for this lawyer with a nasty reputation. There’s something about this old man she likes, and even found charming.

And old man Bittmor isn’t getting any younger.

And if you like this one, February White Lies and March Blues are out now. I'm working on the fourth story, tentatively titled April Yellow Moon. But for it to find it's way to you, the first three have to have good numbers and a decent number of reviews on Amazon.com.

So...if you download January Black Ice, and if you like it, leave an honest review on Amazon.com and leave a message here or at Carol Ann Kauffman, Author, on Facebook, or email me at visionandverse415@gmail.com, I'll send you February White Lies as a gift. It would be much appreciated.