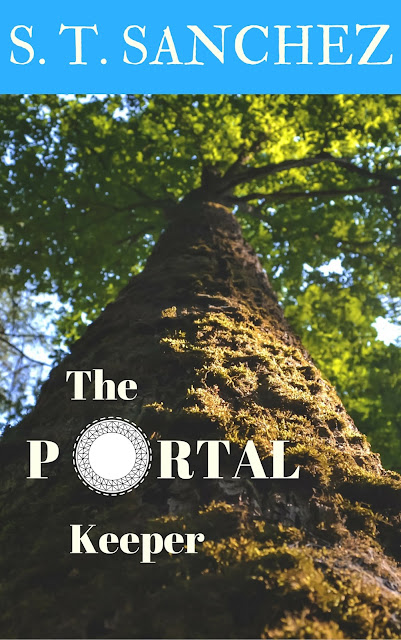 The Portal Keeper
by S.T. Sanchez

A mysterious portal, which opens at dawn and closes again at dusk, is located deep in the woods and kept secret from the vast majority of the people who inhabit the kingdom of Rastella. Only a few are aware of its existence and fewer understand the confusing prophecy that accompanies it.
Now, Ajax Maxwell, who is approaching his 14th birthday and has been in training for the past 2 years, is preparing to fulfill his family’s legacy by becoming the next keeper.
But Ajax is afraid. He’s worried that he won’t live up to the expectations placed upon him and will let down his family, like his brother Axel did when he took over from their father and then promptly disappeared.
When the prince of Rastella comes to visit for the first time, accompanied by Ajax’s childhood friend Nivara, it doesn’t take long for things to go wrong. In an accident, the prince falls into the portal and Ajax knows that it’s up to him to go and get him back.
With the knowledge that nobody who has entered it has ever returned, Ajax and Nivara go through the portal to try to save the prince. But what Ajax finds inside, and what he discovers about the prophecy, will test him to his limits.
It's release date was December 15, 2017. It is available on Amazon and at Barnes and Noble.